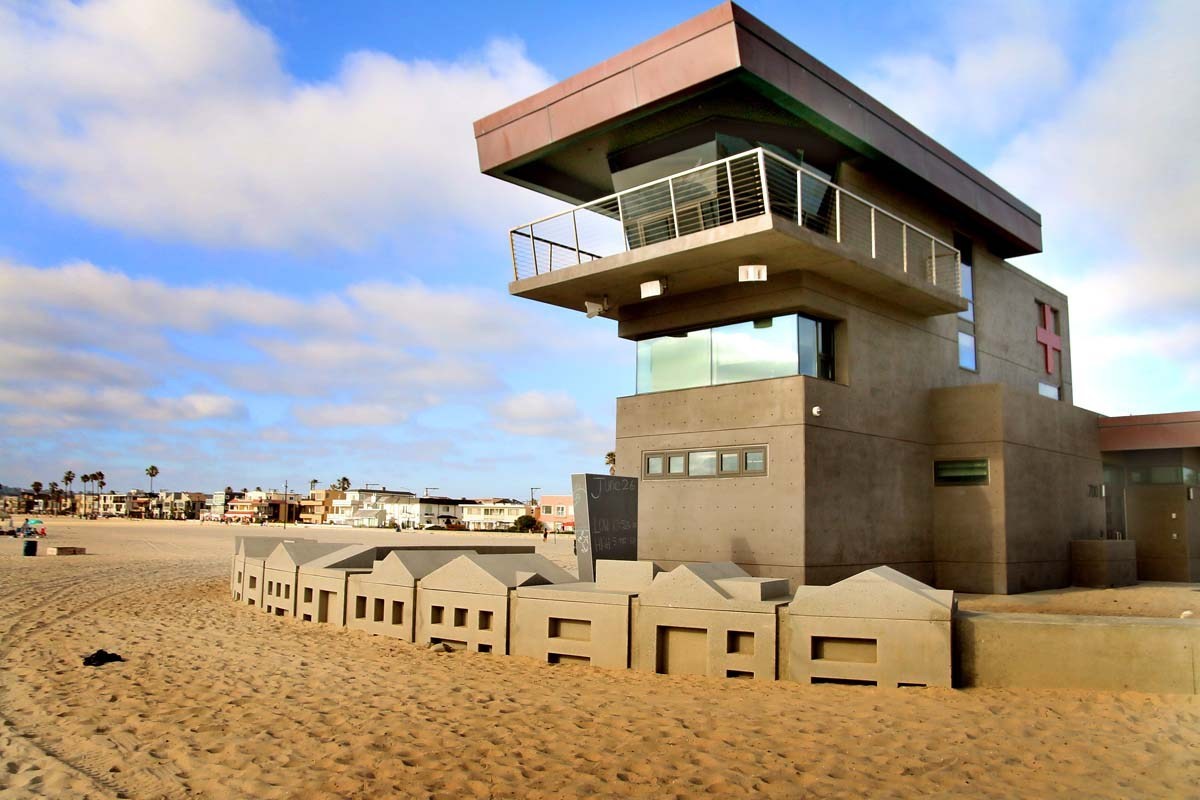 This page is part of our “Influencers” section, where I will tell the stories of historic figures of the past as well as present day people who are positively influencing our city. I plan on doing a deep-comb of every person featured and really learning who they are or were. I will also include places we can still visit today that they either helped create or plaques in memory of them.

Roman is not only unearthing amazing finds in the adventure realm, but is also an accomplished artist and responsible for a handful of hidden art installations throughout San Diego.  Part of what makes Roman’s art pieces so special are their interactive qualities.  You don’t just admire his work, you get to be part of his work! 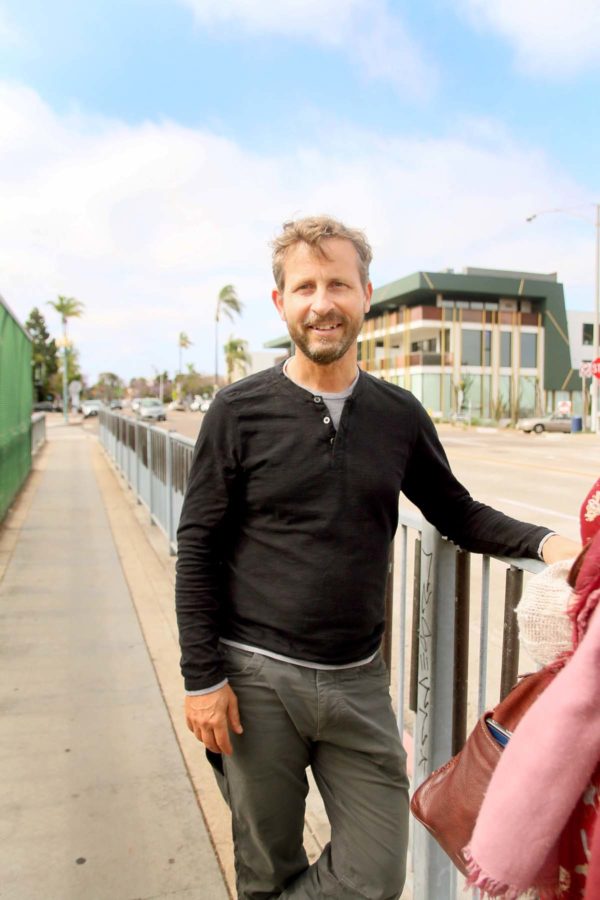 Here is a short interview I did with him to better understand his roots and motivations:

Did you always know that you had to take a path of art in order to feel fulfilled? Yes, but I don’t recall thinking in terms of fulfillment, just that I knew what I liked, and for as long as I can remember, I liked drawing and making things. Moreover, I seemed to get positive feedback about my arts and crafts at school and among peers. I suppose this helped steer me along the path I took.

What other interests did you have growing up that helped mold your artistic style and influences? Skateboarding and Hardcore went hand in hand in my teens in the 1980s. The scene in which I grew up was militantly DIY. There were no skateparks or nightclubs for our music, at least not where I grew up.

So skaters made their own terrain by building ramps or appropriating urban fixtures for their own fun purposes. In the punk scene, we organized gigs with bands from all around the country in makeshift venues–basements, garages, lodge halls, roller rinks and what not. Scenes from town to town networked through ‘zines, all DIY and aesthetically motivated.

I’ve always understood my way of looking at materials and objects with a mind for their ironic or playful potential as having been incubated in the skate/punk scene of my teens.

Tell me a little bit about your biking adventures. When did you first get into adventuring? I think a sense of adventure has infused my approach to play since I was a kid. As a skateboarder, I was always looking for new pools to skate.

Since the pool owners were generally not supportive of skateboarders in their empty pools, we were tactical about it. A lot of planning and work would sometimes go into what would ultimately be a really short pool session, but it was a rush.

I rode a bike in those days, too, but it wasn’t until I was in my 40s that I became a dedicated cyclist. It began with the desire to commute to my studio, as I was getting pudgy; parking was sometimes hard to find near my studio; and I felt like I should do more to burn less fossil fuel. So I started commuting to my studio by bike. When I did, my work day was invigorated.

Initially, my commute route was the safest, most direct and least hilly route that I could figure out. But before long, I mastered that route and started improvising new routes. Eventually, I started taking way-out-of-the-way routes just to satisfy my curiosity about a street or a neighborhood. 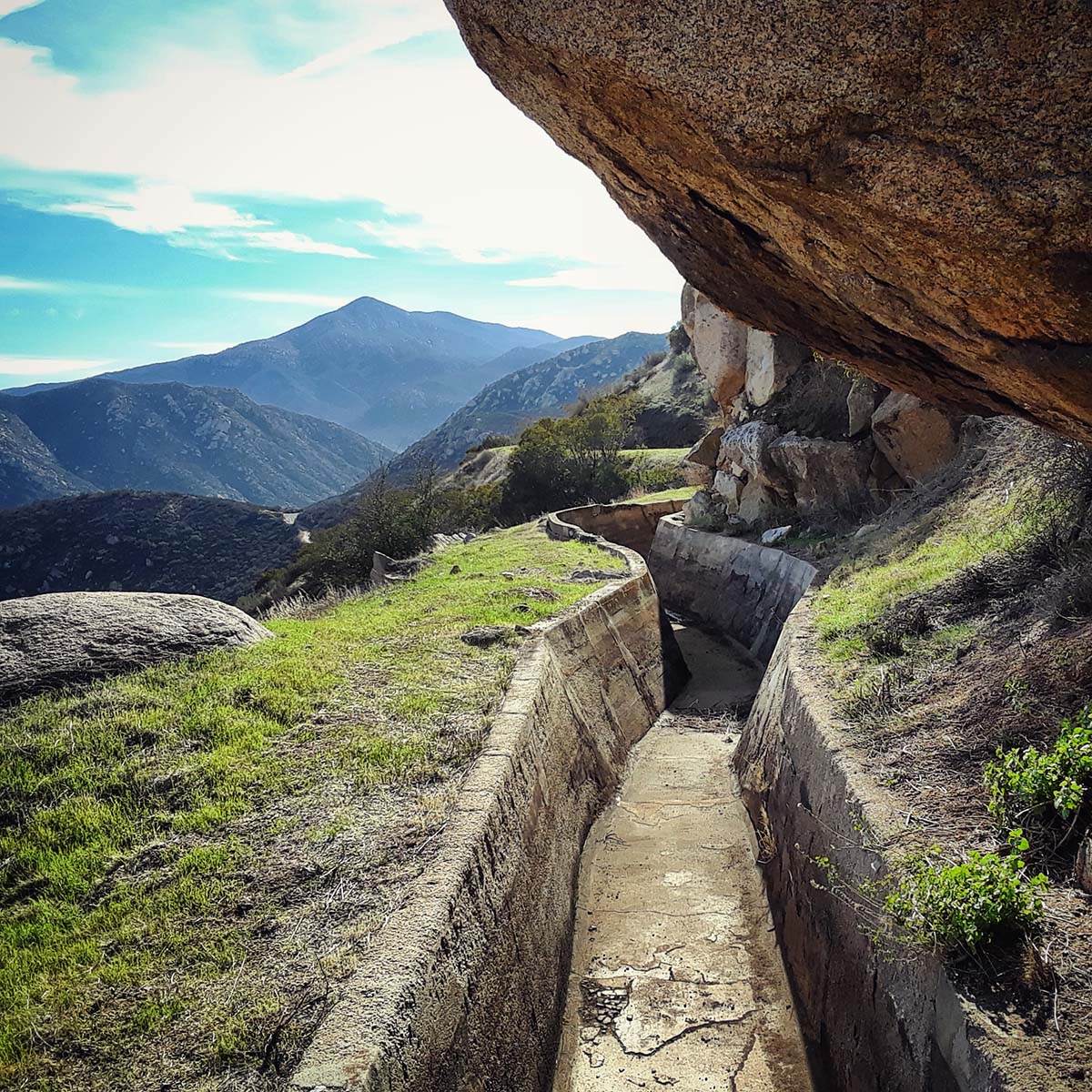 And then, at some point, I was doing bike rides that were no longer commutes at all, just excuses to go exploring. That’s been my approach to cycling for several years now. I’ve found bikes to be really practical exploration vehicles.

They can get places cars can’t, through gates and narrow trails, for example. And they can cover distances that are unthinkable on foot. So I’ve been able to see a lot of really interesting and obscure stuff throughout the county.

San Diego County is a really dynamic and diverse land in which summits always reveal new realms hidden in the next valley over. So one adventure has a way of suggesting the realm of the next adventure and I never feel in like I’m any where close to having seen it all.

What are some of the most interesting places you’ve found in San Diego while adventuring that most people don’t know about? Broadly speaking, the Mountain Empire is the part of the county that I find myself drawn to again and again. I know that’s a really big area and not that specific. But it’s full of epic landscapes, history and desolation. I love it.

High on my list of favorite discoveries is the City of San Diego Conduit, an old flume that transfers water from Barrett Lake to Lower Otay Lake. Some things are best experienced by bike, though, and this might be one of them, due to it’s overall length.

Here are some of Roman’s most interesting installations, hidden throughout the city:

Located on 25th street in Golden Hill and above the 94 freeway, lays a very special bridge that is easy to pass across without thinking twice. This is probably Roman’s most well-known installation in San Diego.  Popularly known as the 25th St. Musical Bridge, its true name is the Crab Carillon, composed by SDSU music instructor Joseph Waters.

“The song is a palindrome, created from smaller palindromes”, Roman says.  That way the song is the same no matter which way you cross the bridge.  The song is played the same forward as it is backward, kind of like how a crab moves. The musical railing safely connects Golden Hill and Sherman Heights together with a protective barrier for pedestrians from cars. 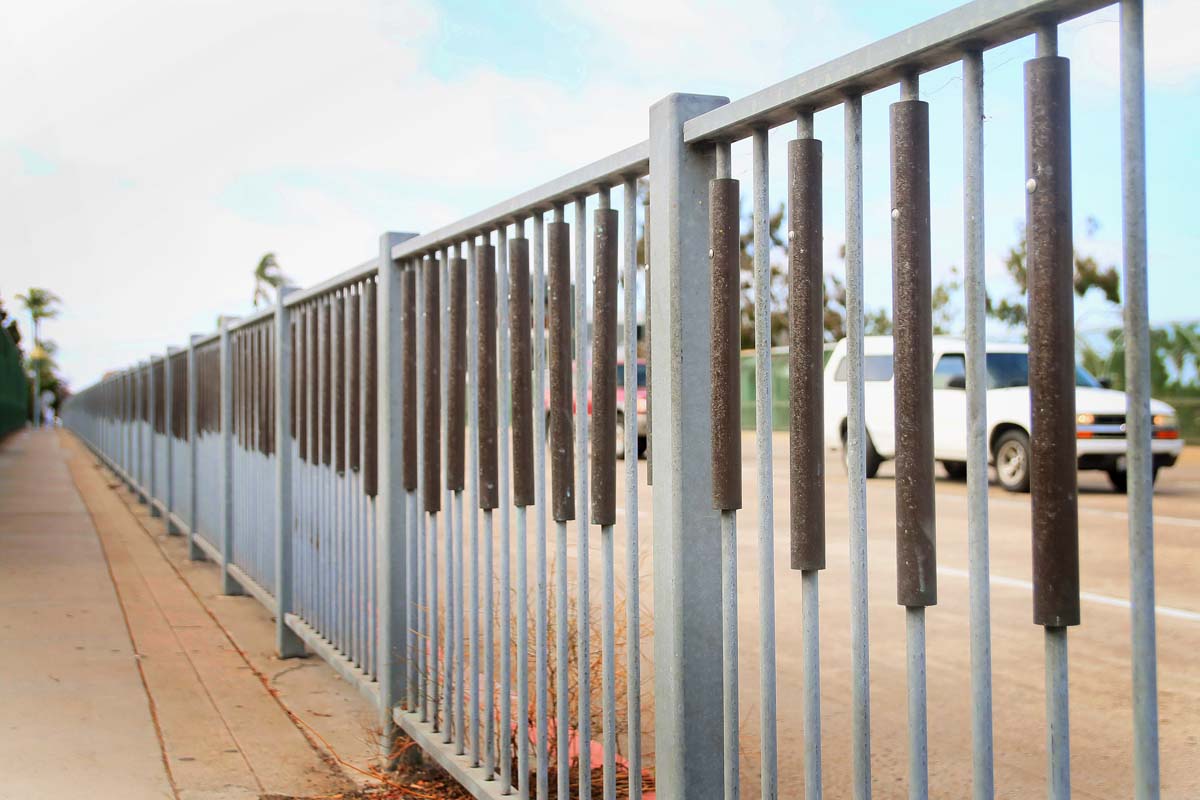 La Jolla has a really cool project going on where they are commissioning various artists to create murals throughout the town.  We actually included it in our ‘Hidden Gems of La Jolla‘ piece because they are so much fun to find!

The mural de Salvo did is meant to resemble a traditional billboard showcasing one of America’s most iconic symbols (sadly, the McDonalds symbol). He created the symbol through the controversial form of rock-stacking, otherwise known as cairns. Stacking stones was originally used by our ancestors for marking trails.  Even in remote areas, stacking rocks is still socially acceptable in order to help other hikers to not get lost. Otherwise, it is damaging to the environment and goes against the ‘leave no trace’ mantra. 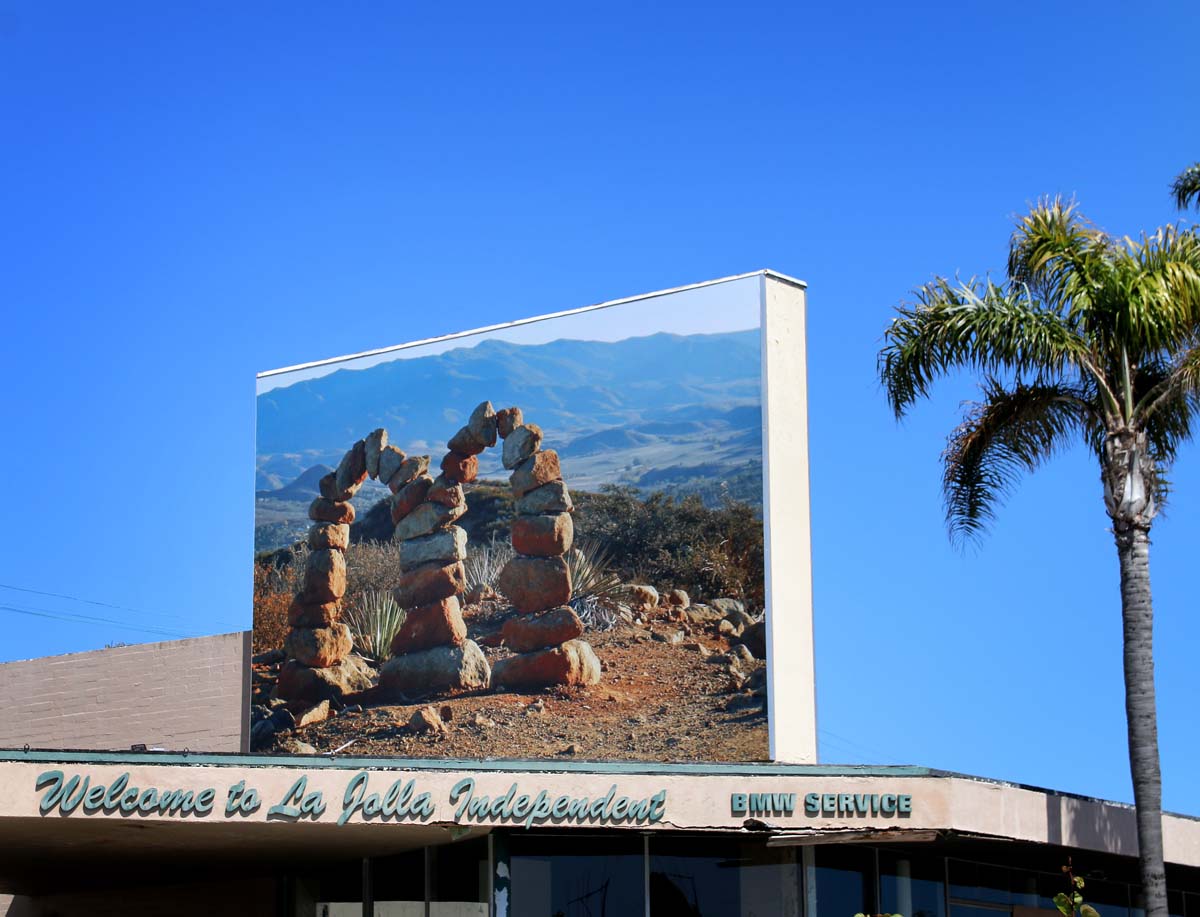 This is another true, hidden gem in San Diego.  Located at the Alvarado Medical Center is a station on San Diego Trolley’s Green Line in the College Area lays a secret riddle that is so easy to miss!  Etched into the bricks above the benches are words that are most likely overlooked by near everyone.  If you take the time to read what it says though, you will see it is a riddle!

“Arteries, veins, and, capillaries. For autos, rain, and, catenaries. All three lines are side by side.

Above, below, and, stratified. None is numbered less than nine. Another was there at the dawn of time.

The last will be here after a wait. Or, right away if you’re not too late.

Look around to solve this riddle. Name all three, top, bottom and middle.

If bewildered, feel the handrail. The answer there is writ in Braille.” 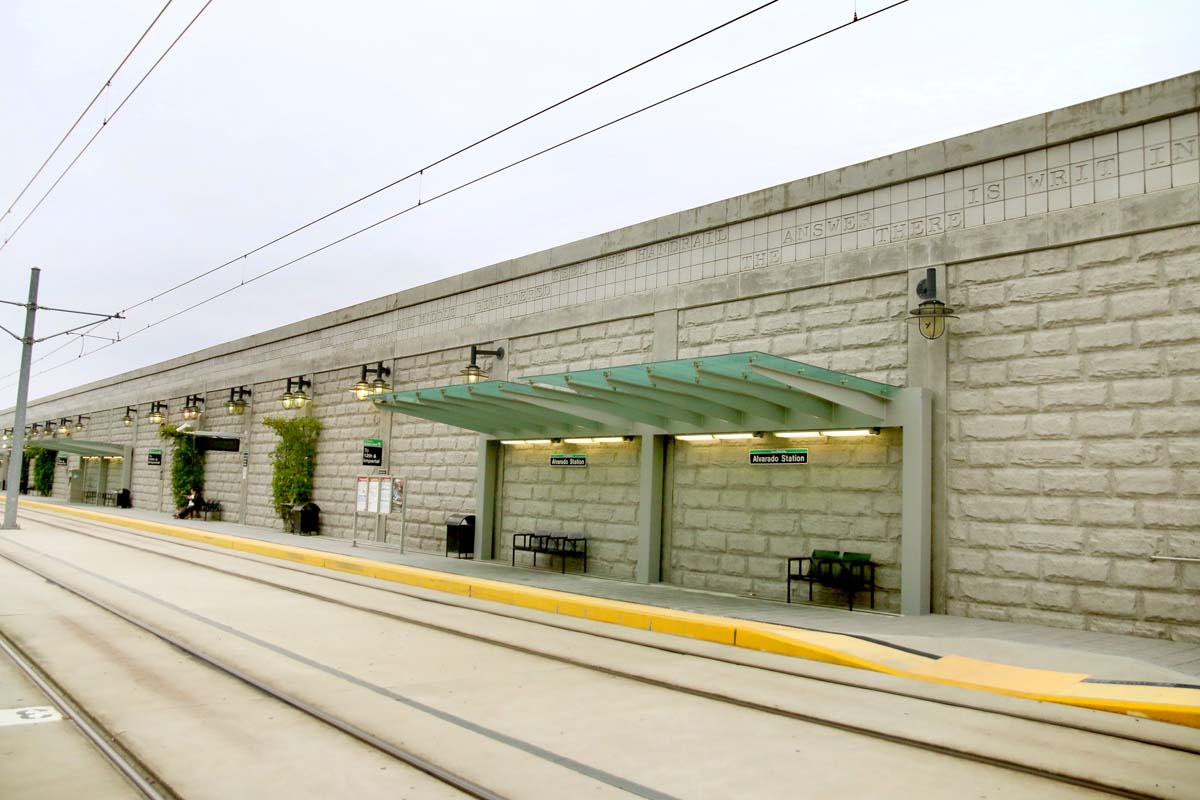 Look very closely for the writing up top: 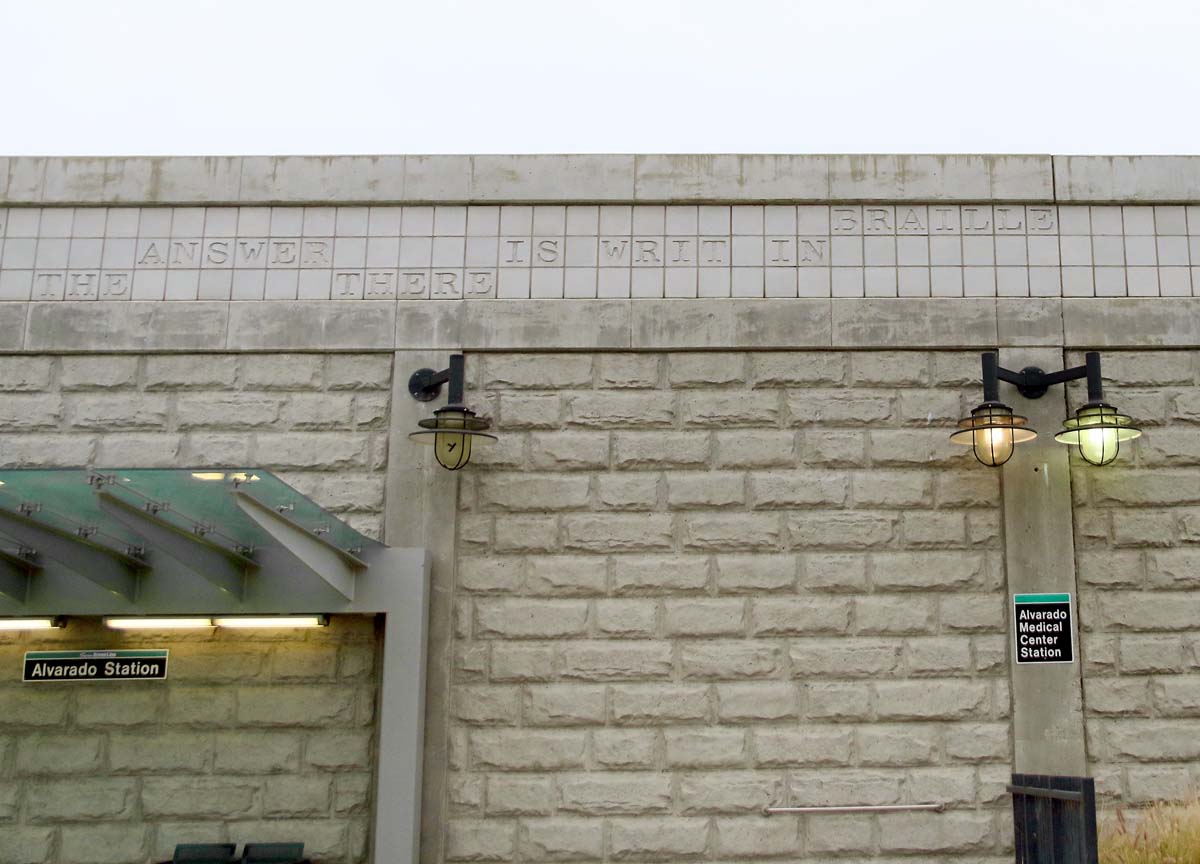 After looking around for awhile, we found the railing with the answer and sure enough, it is written in braille!  I will not be revealing the answer to the riddle, in hopes that this encourages some people to solve it!  It is a truly moving answer. 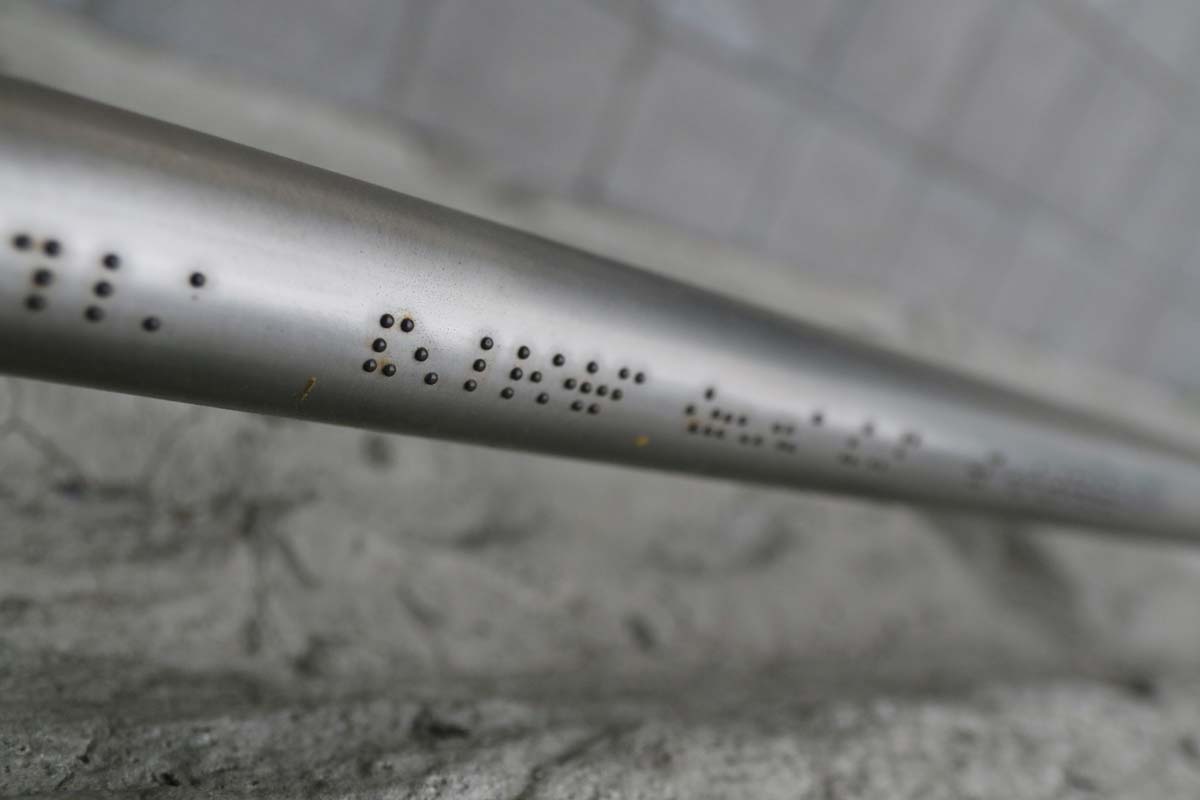 This piece can be found at the Mission Beach Lifeguard Tower, only yards from another hidden gem on our site, Graffiti Shack. The piece was completed in 2019 but he began it 14 years prior. Roman said that his inspirations for this design came from the homes along the Mission Beach boardwalk and sand castles.

The design was meant to be legible and interesting, like small ruins that are submerged and buried from time to time.  It is designed to survive the elements.  Depending on what day you come, sometimes the homes are completely covered by sand, other times exposed. 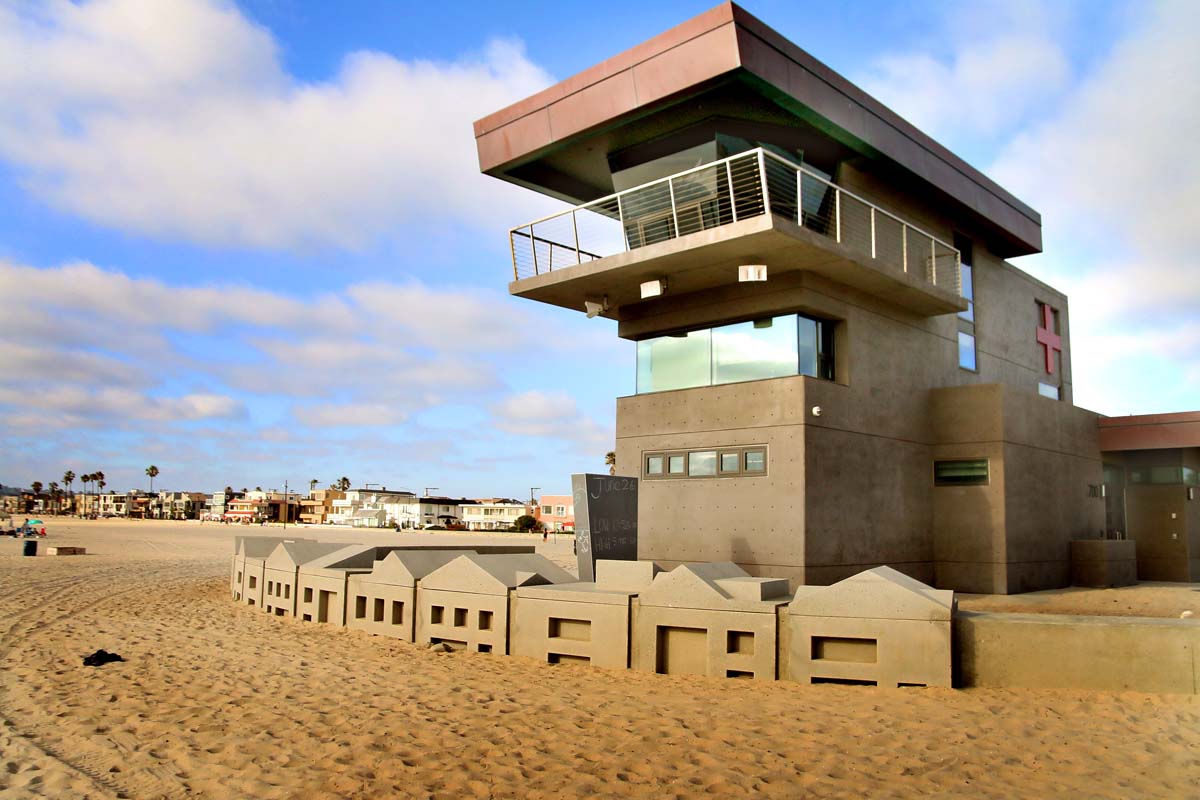 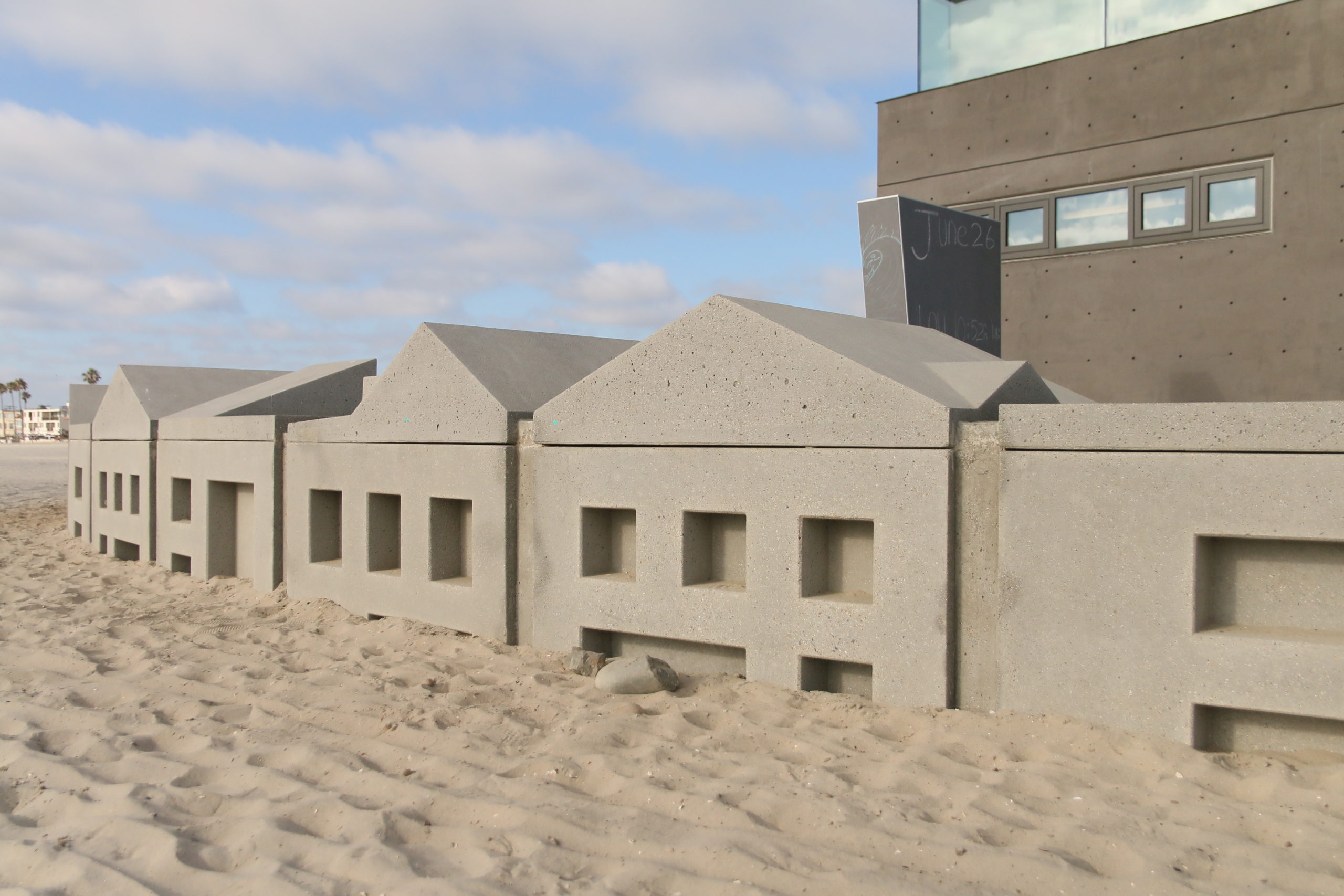 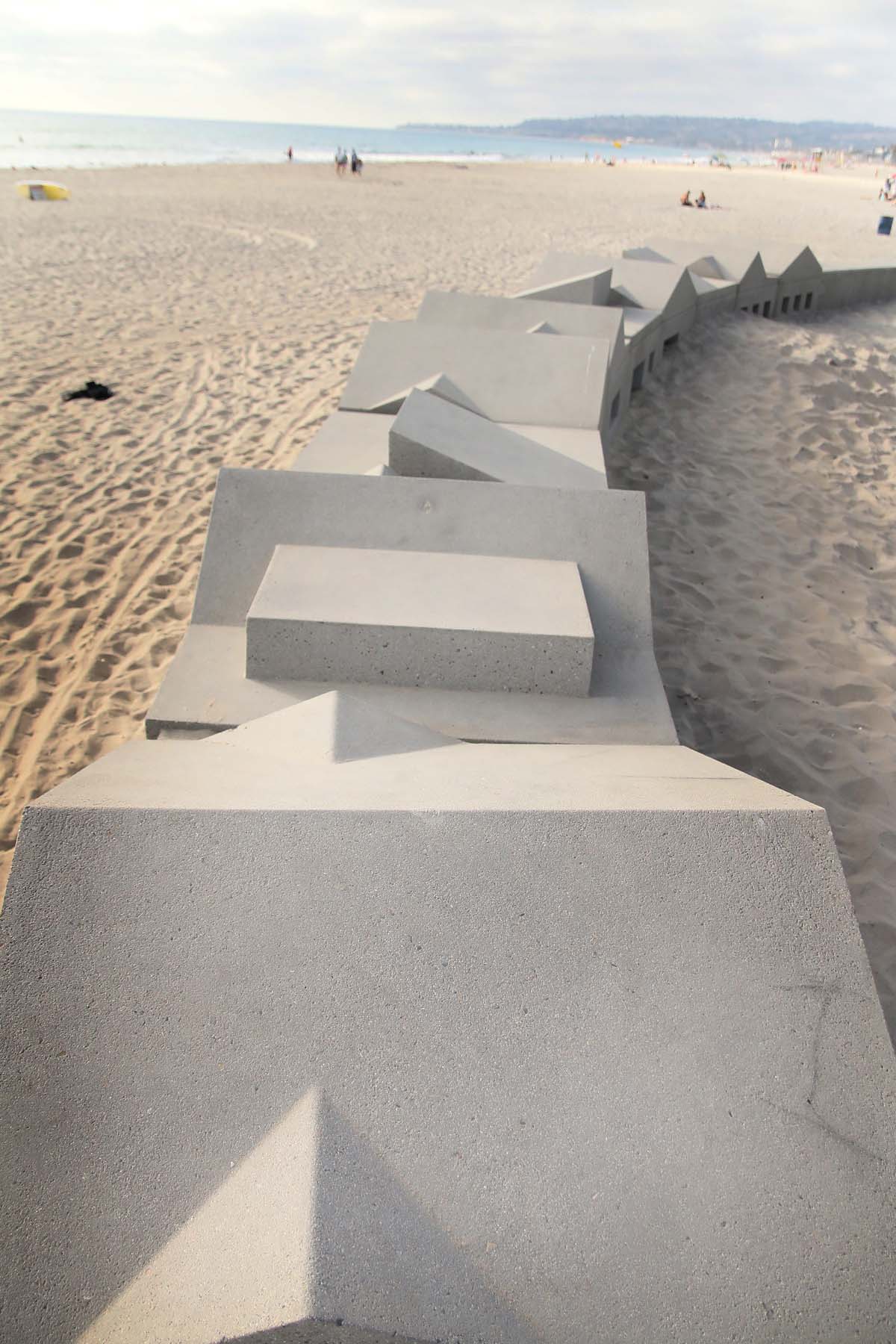 Located across from one of San Diego’s significant, historic sites, La Punta del los Muertos, is another one of de Salvo’s unique installations. The Riparium was made possible from a trust that modernist architect Lloyd Ruocco left 25 years prior for a centrally-located public park featuring “exceptional urban design”. The park’s location is a meeting point for the land and sea. Roman wanted to celebrate the bay front access with this piece as a welcoming to the city.

He was inspired by Ruocco’s unique architecture, which showcased plain buildings from the outside.  From the inside though, the windows and beams framed the outdoor landscaping beautifully. To create this piece, de Salvo harvested dead trees from Sherman Heights and Ramona and carefully sliced the trees in half, then pieced them back together. 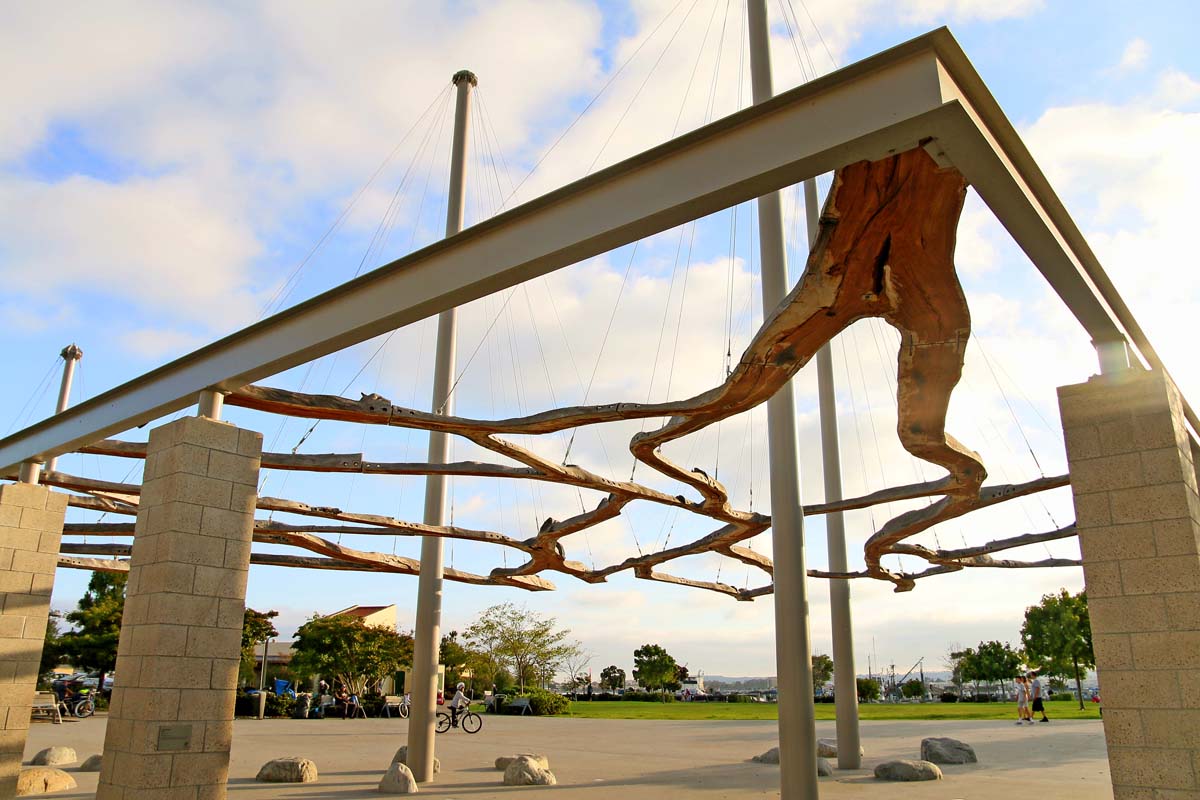 In Romans’ words: “Utility Filigree was done in 2006. When the Museum of Contemporary Art San Diego was remodeling and expanding the baggage building of the Santa Fe Depot, they had this emergency stairwell being built in the core of the building for which they commissioned me to come up with the lighting. The bare, utilitarian character of the stairwell and its basic use as a vertical corridor were the primary things on my mind in my response. I had previously done some ornate pattern pieces using electrical conduit.

I had also previously conceived works such as Alvarado Riddle that unfold as the viewer passes through the corridor. I decided to utilize the motifs of my conduit pattern pieces in a way that would form a sort of crescendo as people ascended the stairwell. Basically, the ornate use of a utilitarian material as a way of counting stairway landings was what I came up with. I fitted the conduit motifs with bare incandescent light bulbs to be basic and logical. It was such a satisfying surprise, experiencing the cavernous character of the space when lit this way.” 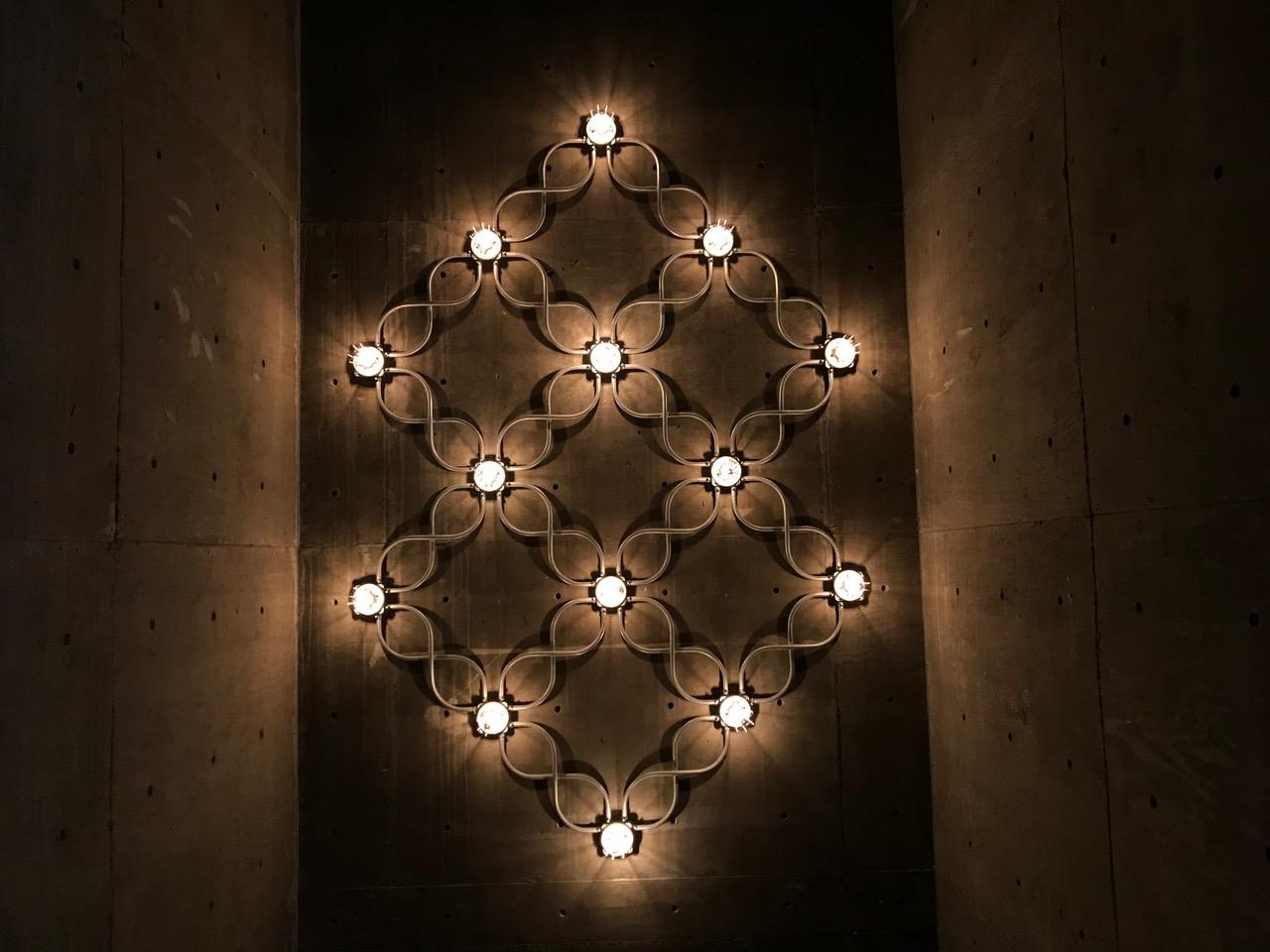 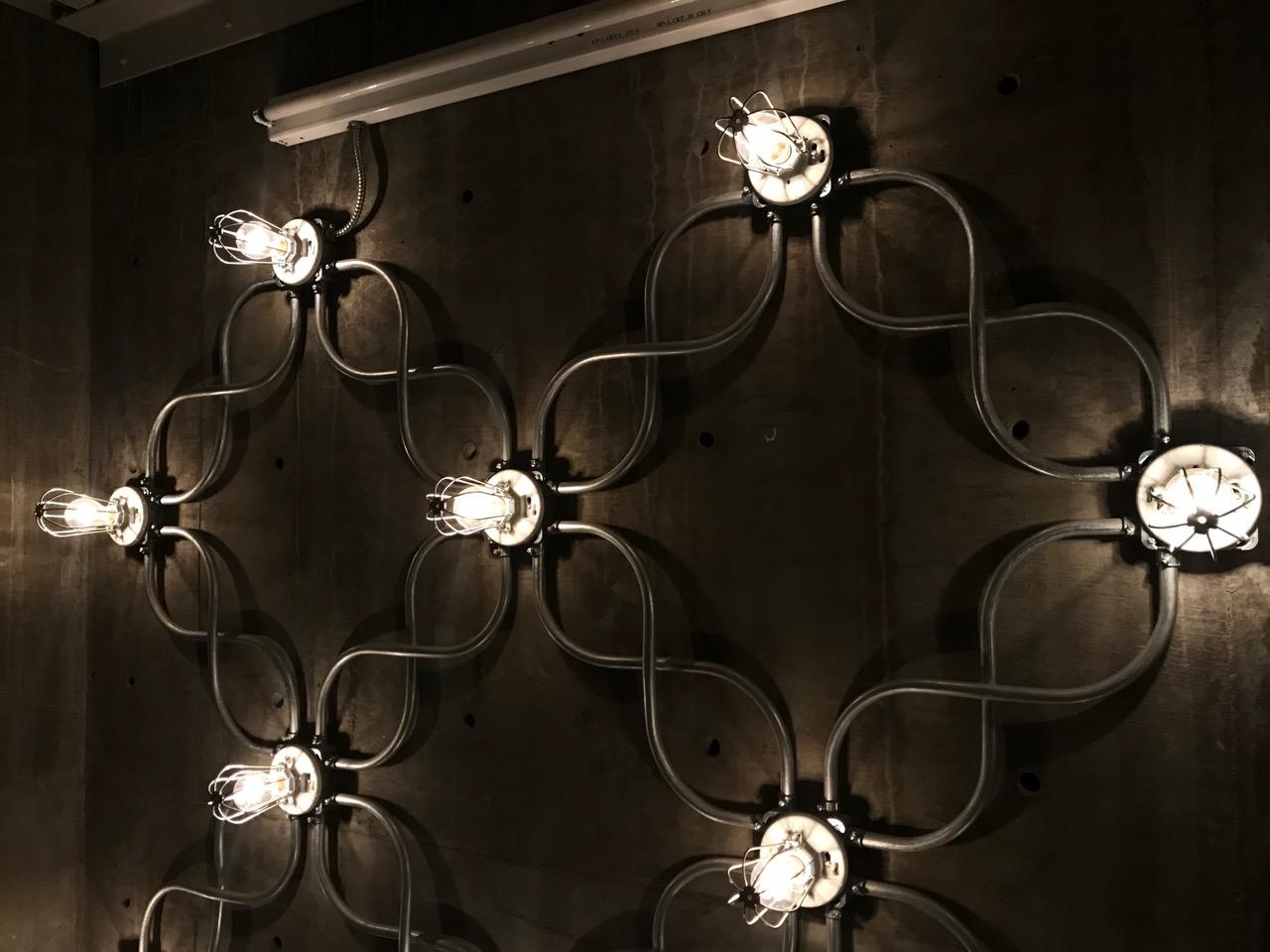 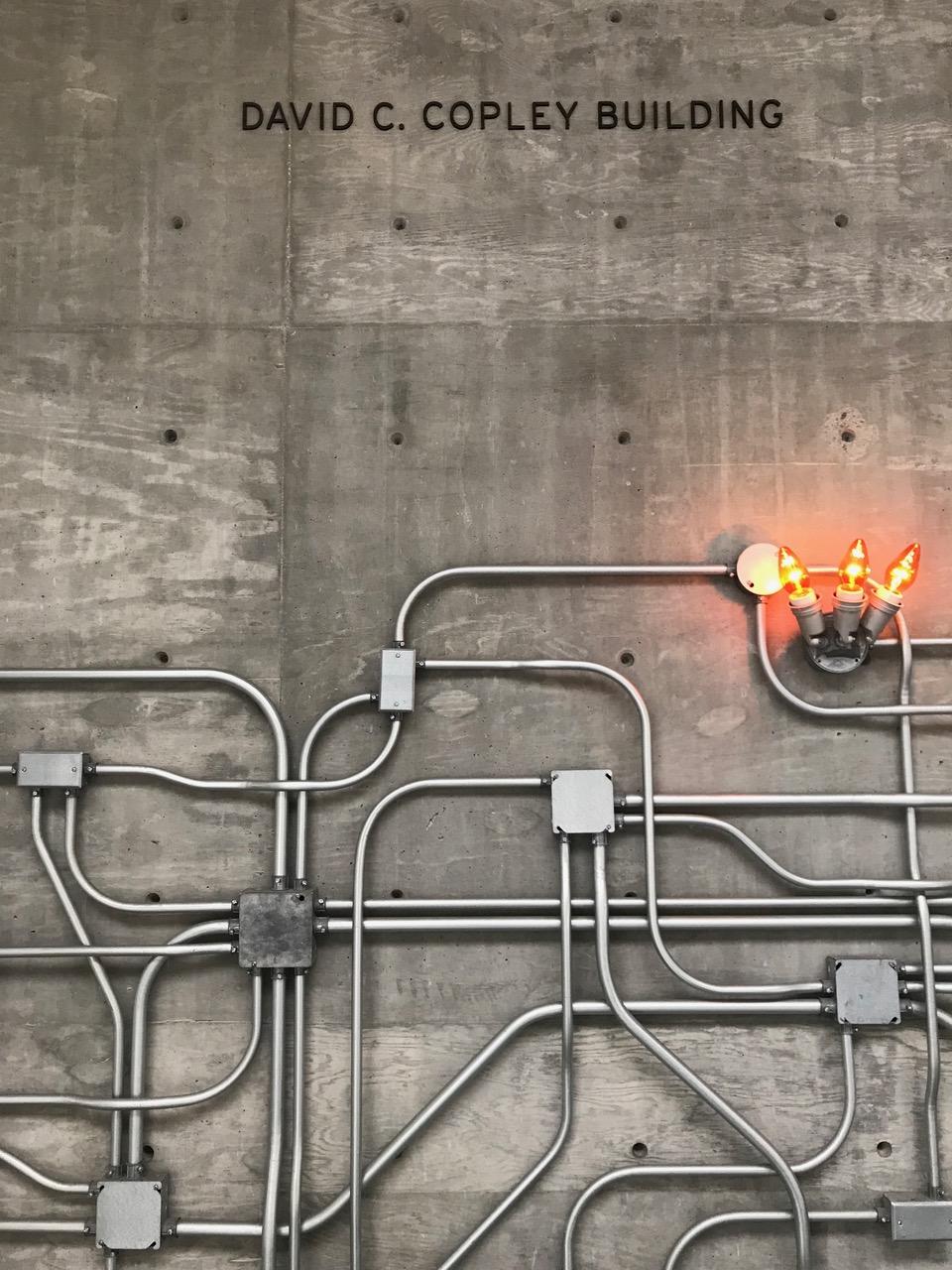 In Romans’ words: “Grape Maze was done in 2012. That commission was instigated by the California Center for the Arts Museum through the City of Escondido. The inspiration for the piece began when I noticed on a hot, dry morning when I visited the site, that there was water on the concrete walkway coming from the rainwater downspouts of the building. Because the building has a metal roof, it is prone to collecting condensation at night when conditions are right. I thought I’d like to come up with a way to harness this natural phenomenon. Planting grape vines beneath the two downspouts was how I decided to do it. I had to cut away the concrete in the places where I planted the grapes, and chose a native riparian variety that in theory would do well irrigated by the downspouts alone.

I had made mazes in previous projects and have always liked them for their visual complexity and ability to engage people in a playful sort of problem solving. So I decided to use trim boards on the exterior of the building to create mazes for the grape vines to “solve.”‘ 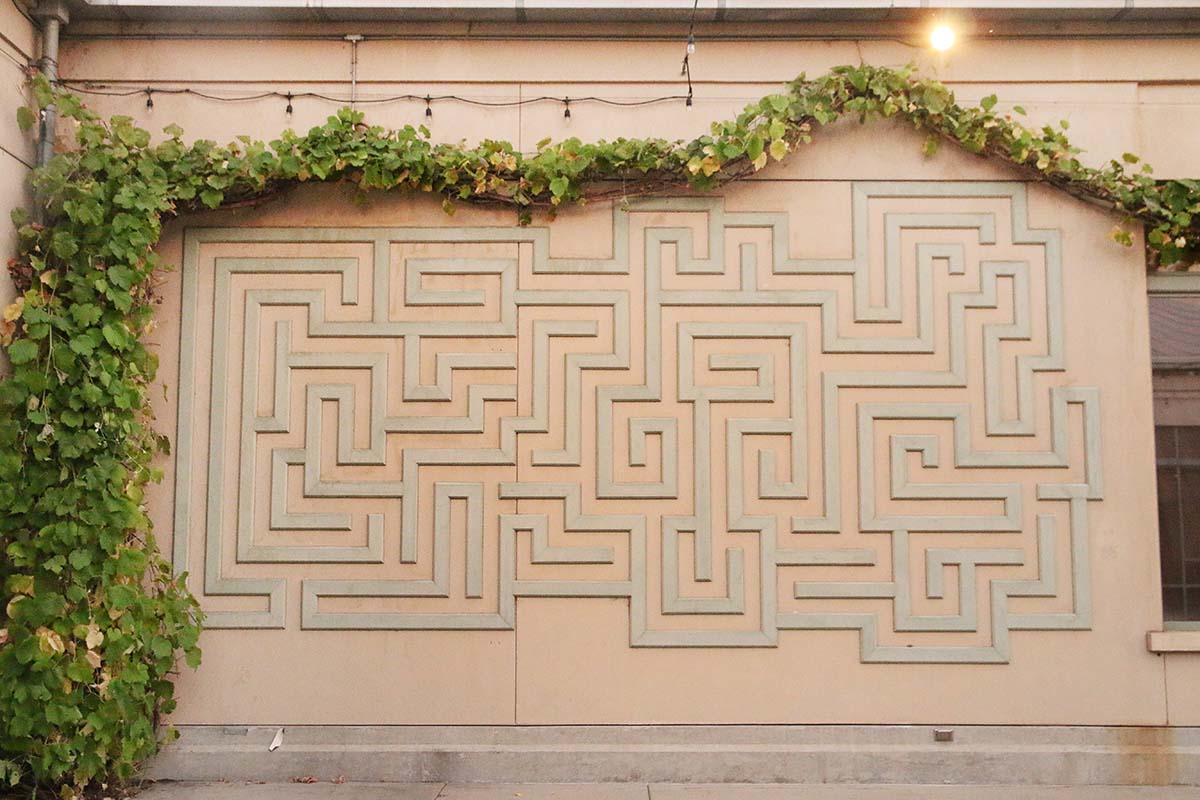 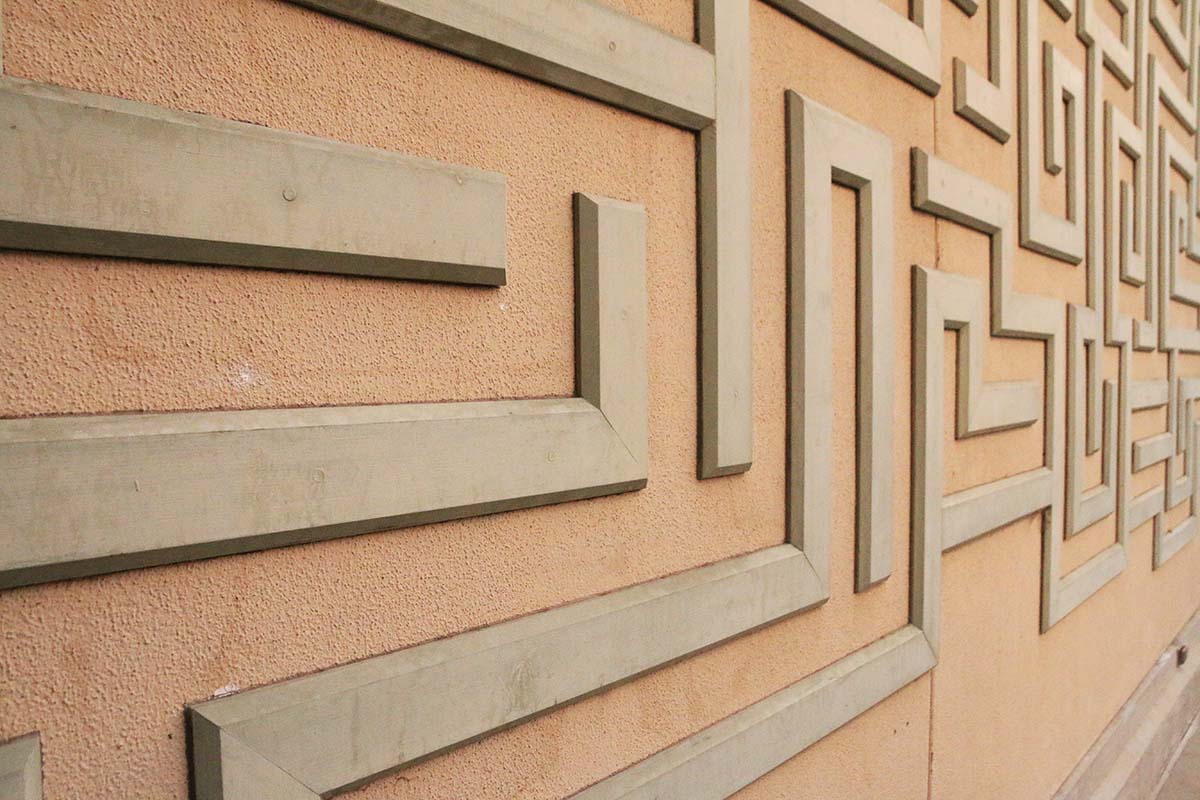 Roman was the artist resident at the Timken Museum over the summer in Balboa Park. Here he created is sculpture, Electric Picnic, which was based on the Rococo-era Blindman’s Bluff (1775-80) by Jean Honore Fragonard.  It was a lot of fun watching his piece come to life! 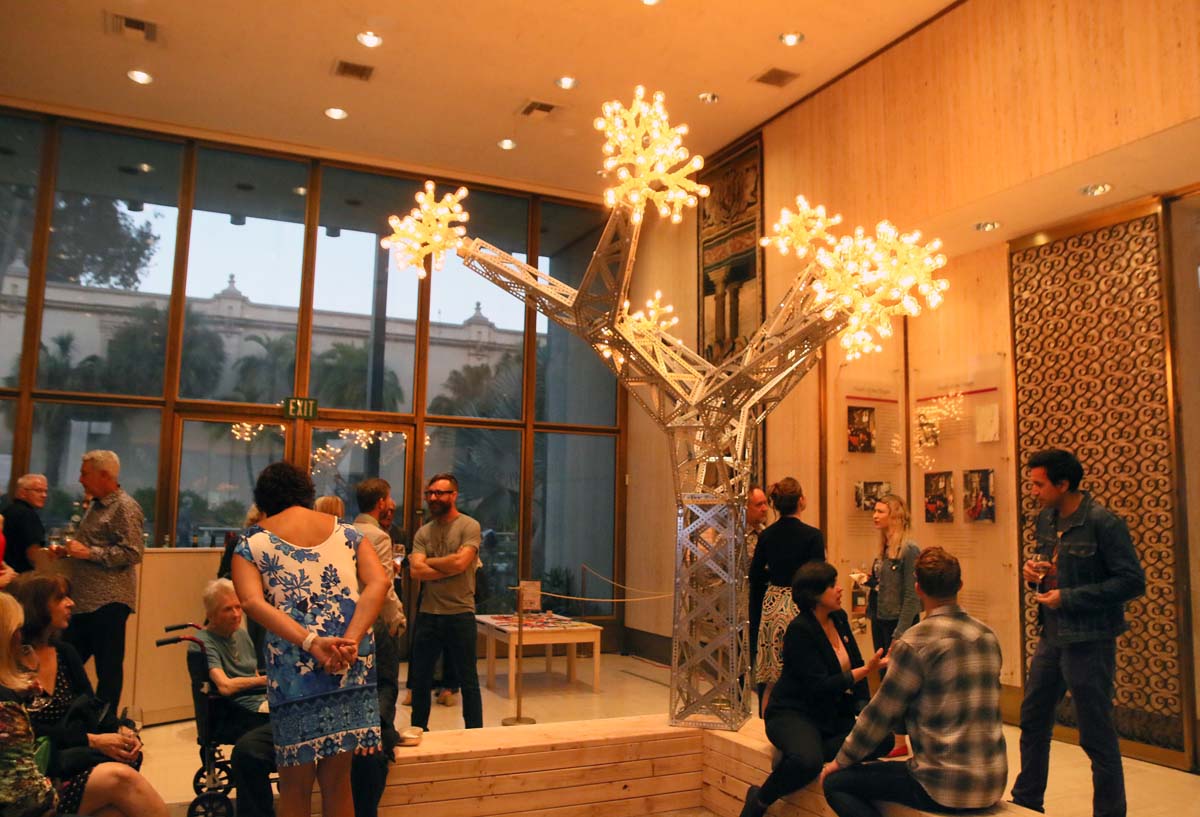 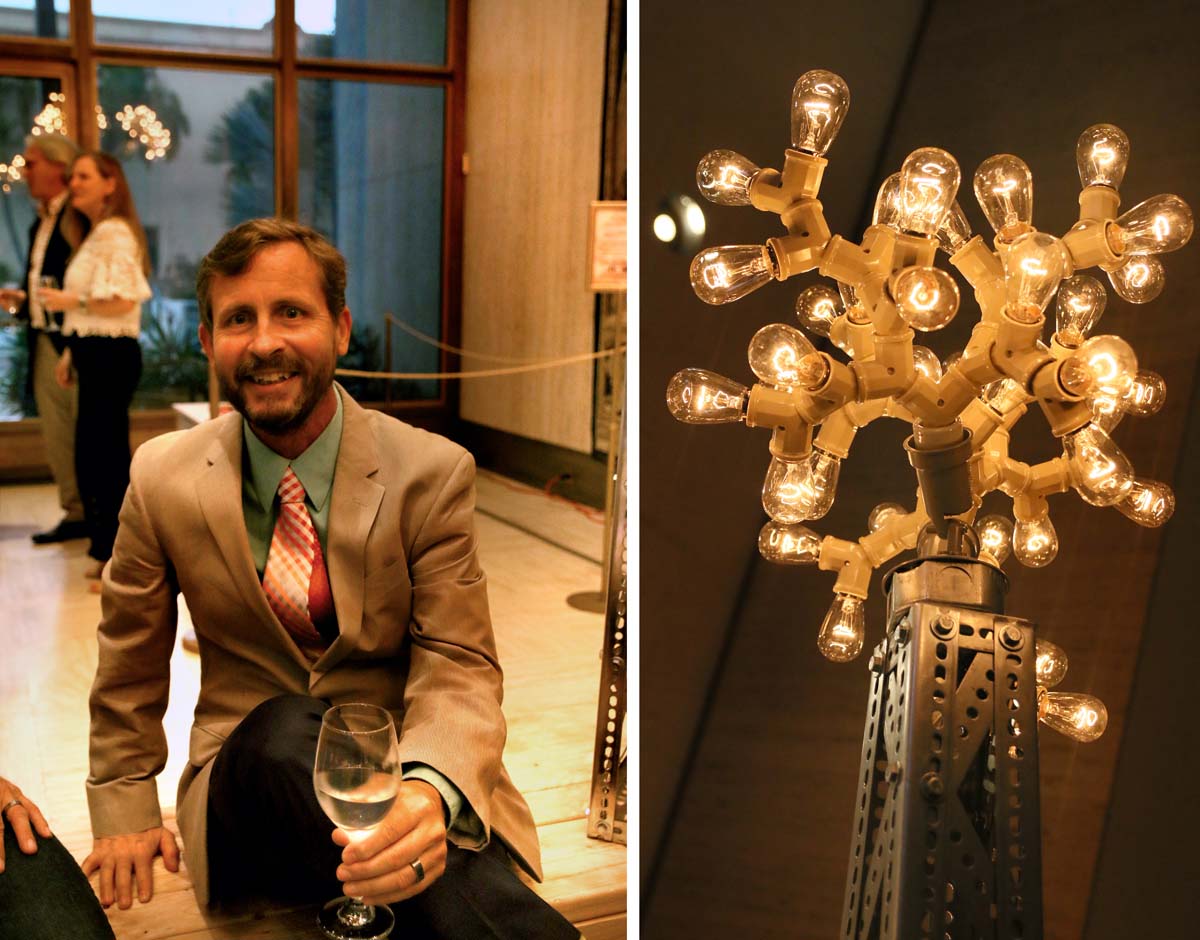 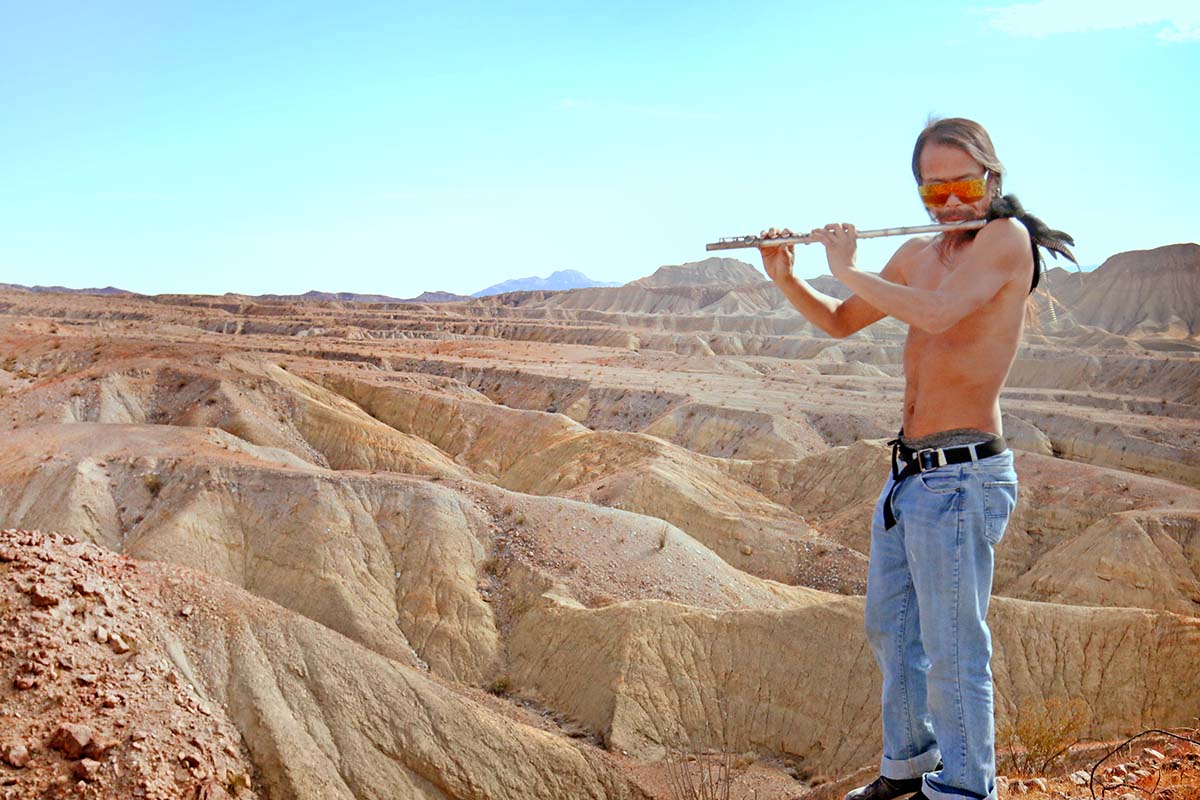 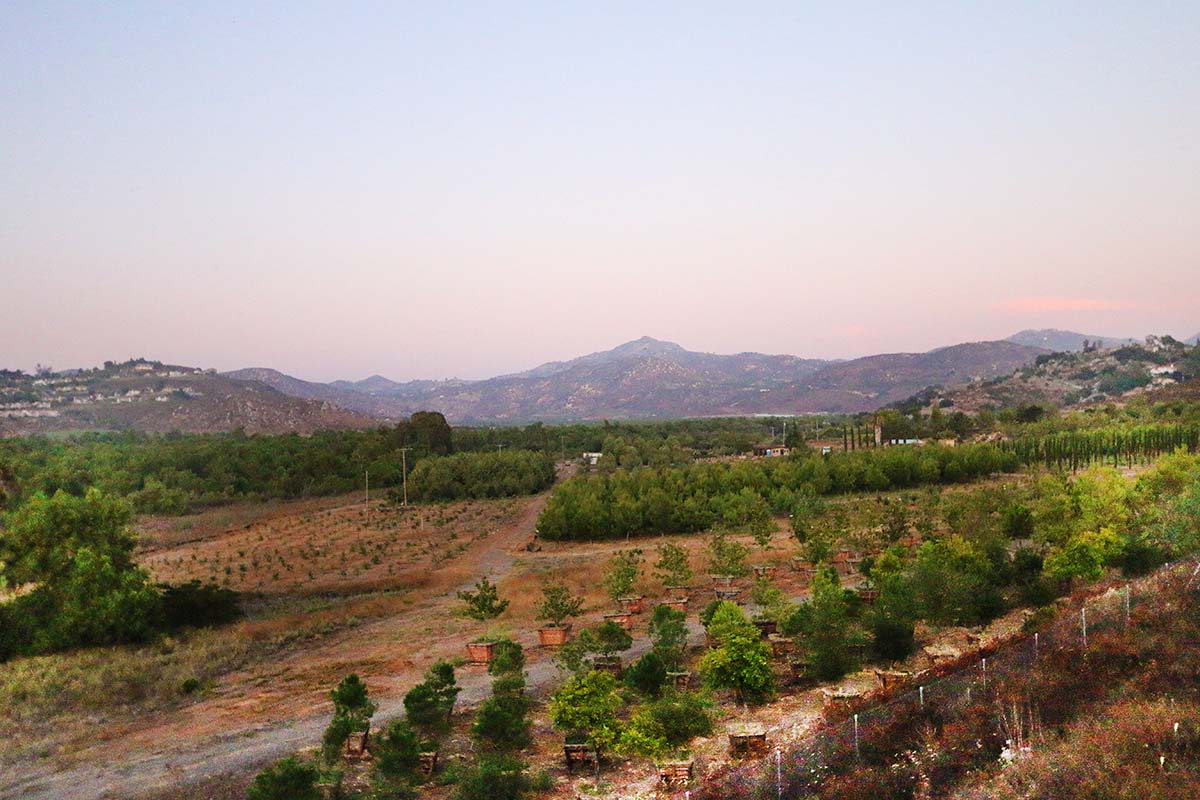 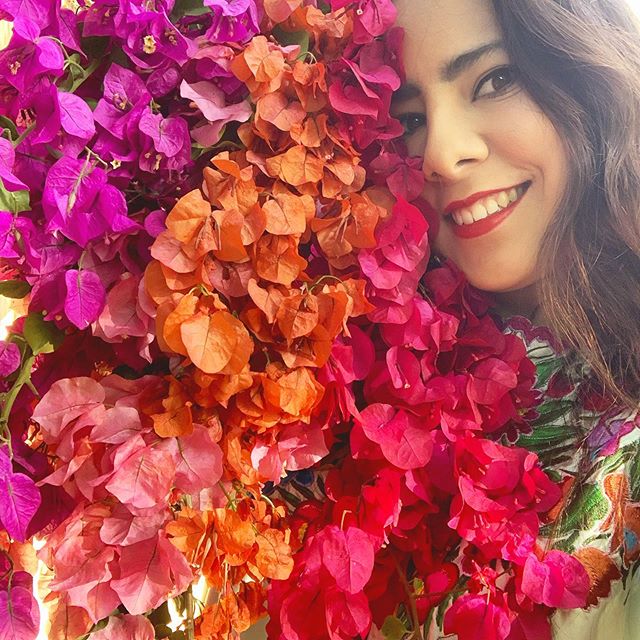