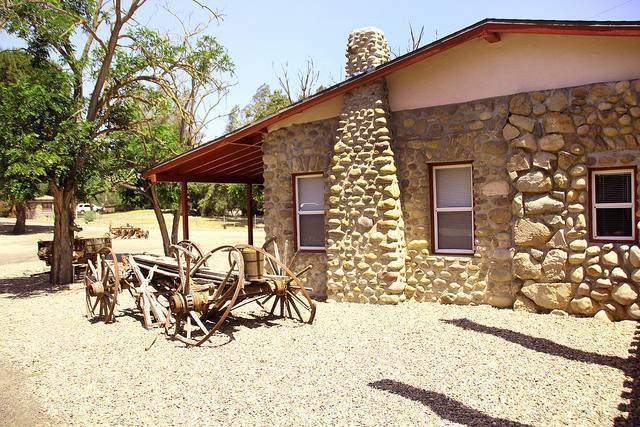 About the Poway Stage Coach Stop:

In 1888, the first stage coach began to transport mail from San Diego to Escondido. Back then, Poway (known as Paguay at the time) was called the Twenty Mile House as it was 20 miles from San Diego and 20 miles from Escondido. Due to its convenience, it was used as a rest stop for tired passengers. The stage would make one stop at the post office in Poway and then continue on its way. 8-10 passengers were allowed to ride the stage coach on the 3-day journey for $1 or a round-trip for $1.50.

While you’re in the area, make sure to visit Metate Meadows nearby!

The route would cause numerous problems for the passengers due to severe weather conditions, windy mountain trails causing the mail to tip over and sometimes even the passengers falling out! The stage line was discontinued in 1912 when the automobile facilitated an easier form of mail delivery. The road station stayed in operation until 1961 though. By this time 80% of the roads in Poway had been paved.

There are rumors that the mission above Old Town was robbed and the loot was buried somewhere along the creek in Poway, which runs right along highway 395.

Highway 395 was first commissioned in 1926 as a minor spur route of Hwy 195, which connected Washington to Canada. In the 1930’s, the 395 was expanded to cover Washington to San Diego and then over the Camino Sierra. Before highway 395 was around though, people traveled by stage coach.

All vintage photographs were provided by the Poway Historical Society unless otherwise stated. 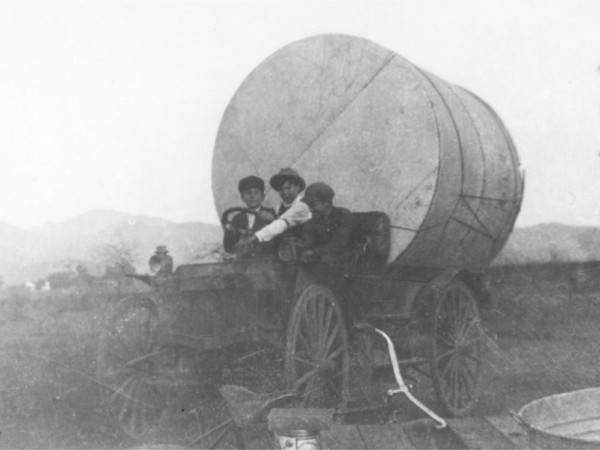 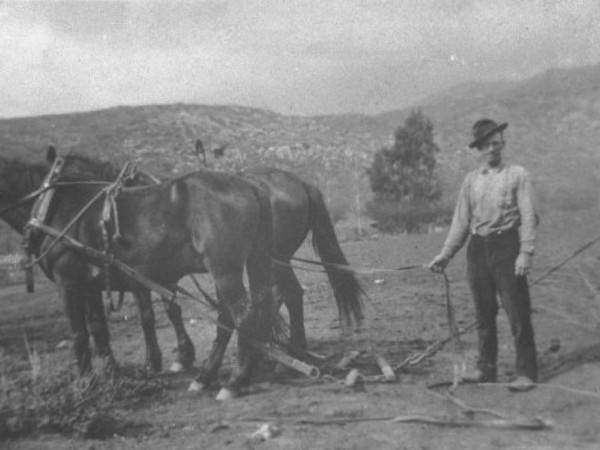 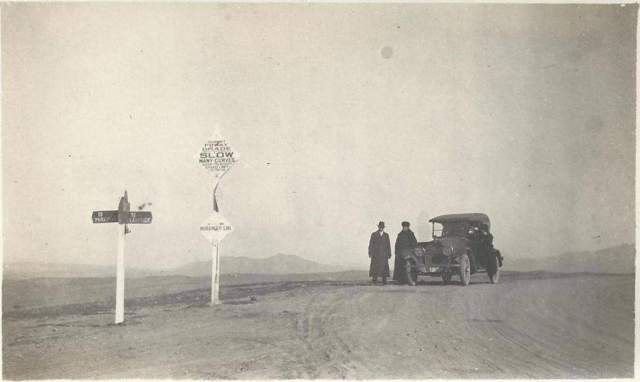 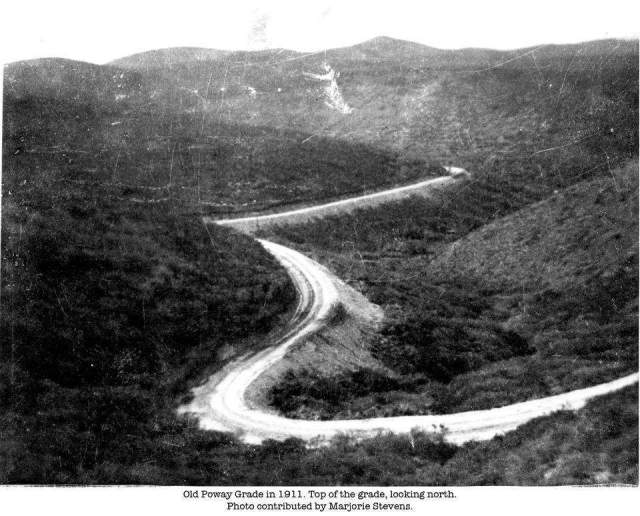 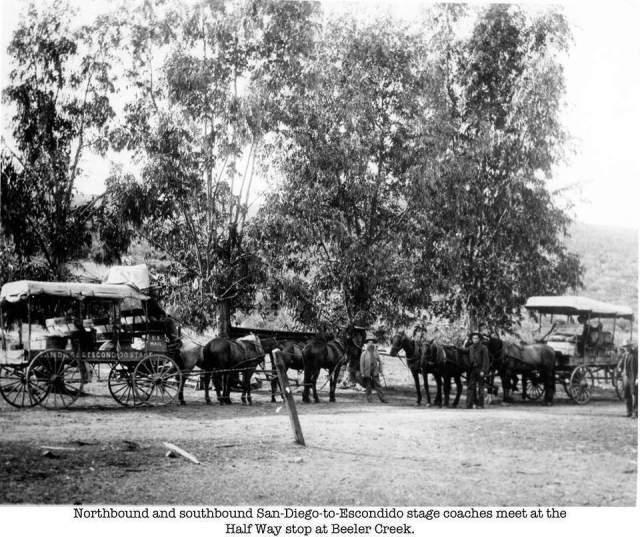 There are at least 7 stone structures and two historical bridges on Old Pomerado rd. All of the homes are said to be tied into the stage coach days and were used as rest stops. I have taken photos of the structures and provided what history I could gather:

In 1923, Daniel Stuck and his family brought granite rocks down from the hillsides and began to construct what became the Big Stone Lodge. Stones were brought in using an old model T truck from a hillside off of Carriage rd. to build the main house and fireplace. Boulders were brought down from the creek side and built near the site of the Twenty Mile House. Where the Twenty Mile House was exactly is up for debate and uncertain. It is in this vicinity though.

In the 1880s, Daniel Dodson shot Henry Feeler dead in the Twenty Mile House, which Dodson ran. Apparently the murder occurred over jealousy. Feeler was shot through the heart with a rifle.

Like all of the stone buildings on this street, the lodge has had multiple purposes such as a gas station, motel, a restaurant called the Topsy’s Roost and eventually a restaurant/dance hall owned by Randy Jones. The dance hall earned a reputation for being wild and raucous.

Sadly, once new housing was put up, the residents began complaining enough about the noise and ultimately helped in the closing one of Poway’s best and only honky tonks. “Rumor has it that Big Stone was off limits to sailors from Miramar for many years. Too many of them didn’t make it back to base on the windy Highway 395/Pomerado Road after a night of drinking.” 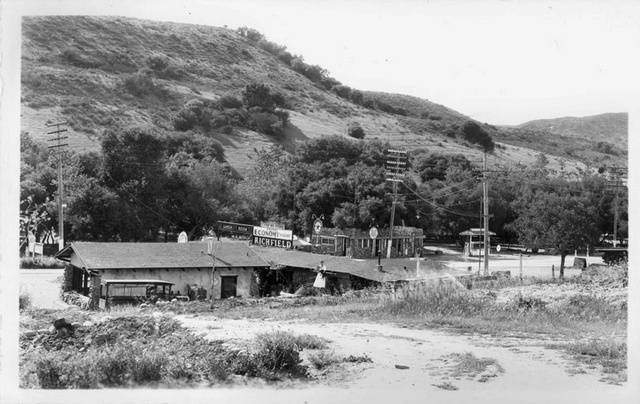 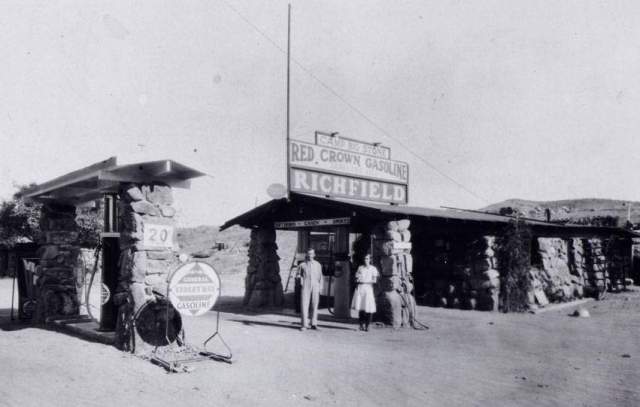 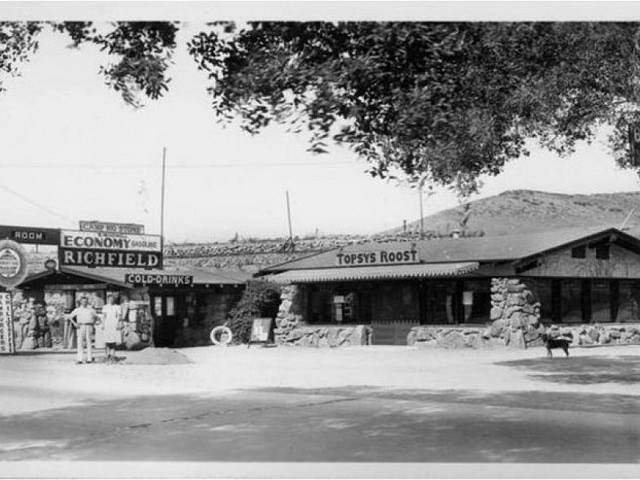 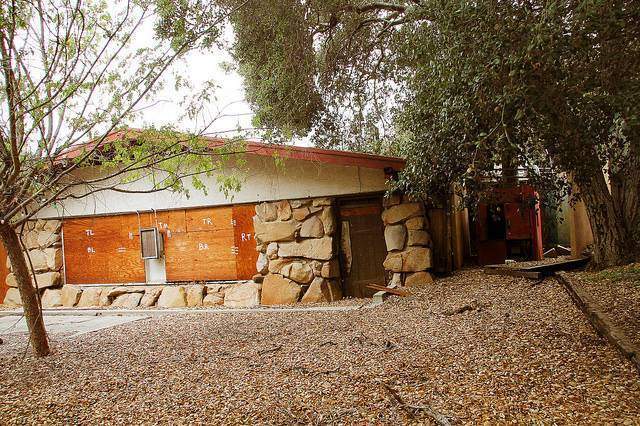 We did a fun photoshoot in here one night: 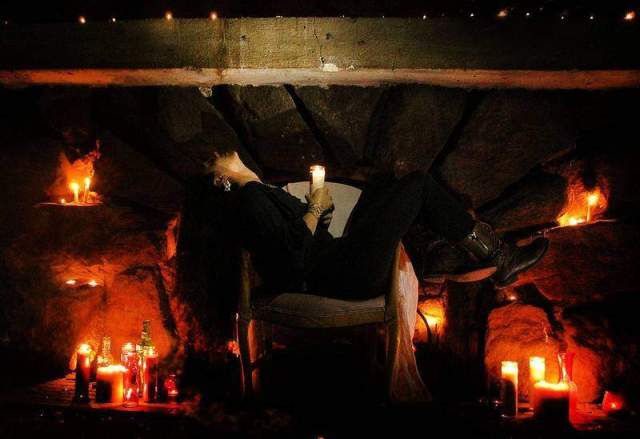 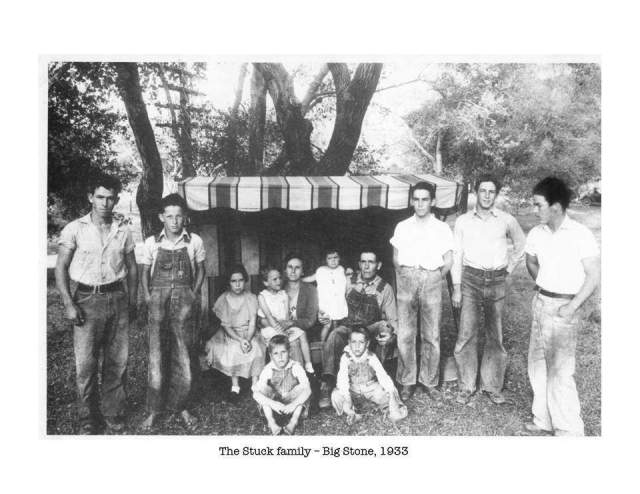 The stone house shown below was built in the 1930’s and was constructed from rocks that were brought from the hills nearby. It appears to have been built around the same time that the Big Stone Lodge was built as they are the only two structures with the same types of rocks. Unlike the other stone houses which have creek stones, these are actual boulders. I had an archaeologist analyze the rocks and he believes many of them are metates due to their flat and smooth surface.

Today this adorable home is an art center for all ages but has had many uses in the past. In the late 60’s to early 70’s it was a residency. “We would sleep on the roof in the summer,” a previous resident said. Before that it was a recovery home for distressed/recovering alcoholic women called the Serenity House. Before then it was a Veteran’s hall where they would hold actual wakes! 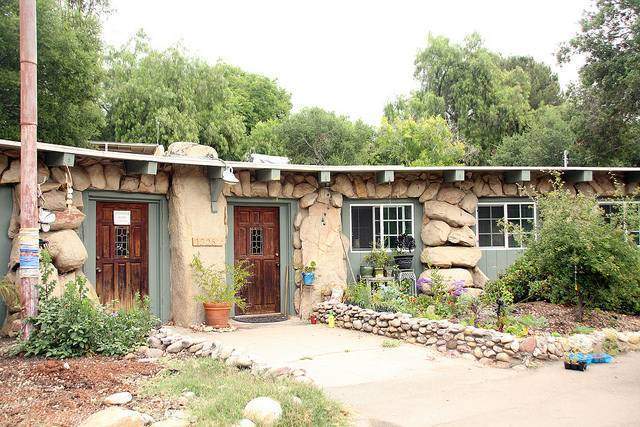 The house below and the remaining homes below were all constructed from riverbed stones. This home was once an old tavern called the Sportsmen’s Cafe and was said to always be busy and a great place to play pool. In the 80’s it became a bait and tackle shop for the Jack Rabbit pond nearby. “As kids we used to work at the tackle shop for free worms to fish at Rabbits with,” one Poway resident shared. 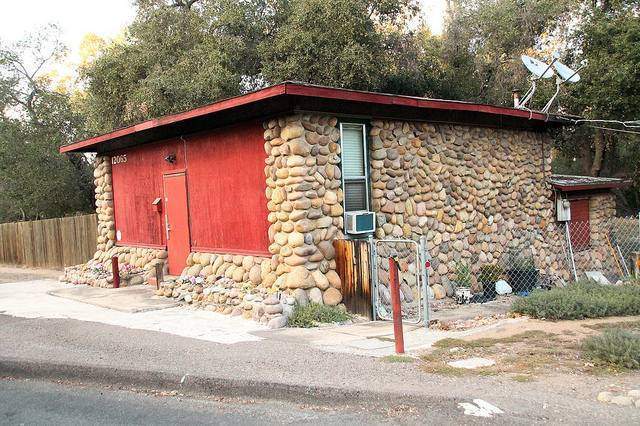 This house (originally just one room) was the original stage coach stop and was used as a relay station for the stage line. The horses were changed here for the last leg of the trip to Escondido. The rest of the house was added in about 1925. Eventually the stage stop was moved to the Big Stone building because they had meals available and an outhouse. There are many old artifacts from those days displayed around the home: 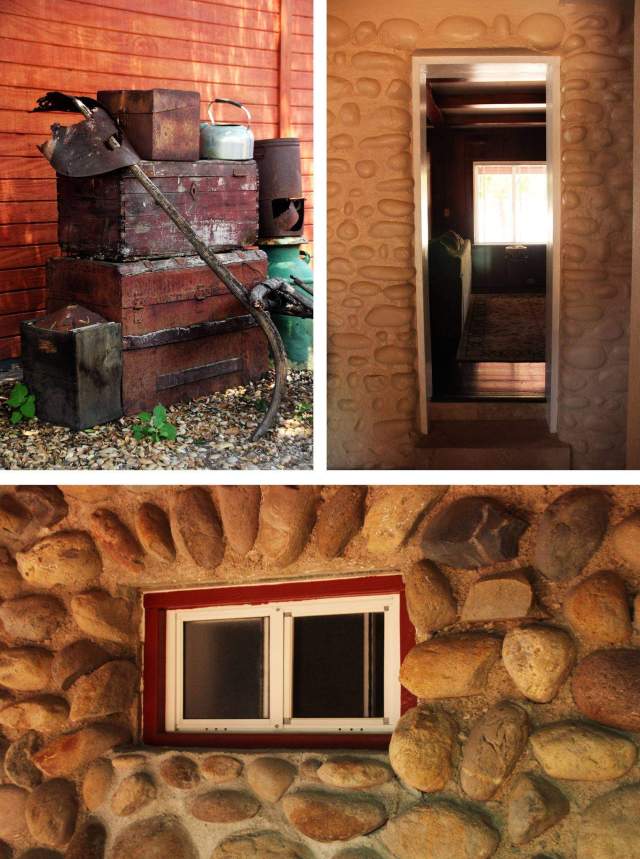 This small hut was used to smoke the meats for the passerbys: 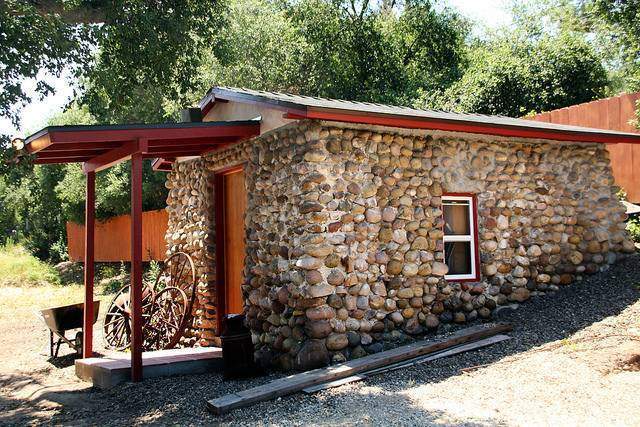 Wyoming Grove Cabins: I believe the 4-unit lodge below were the cabins originally built by the Stuck family: 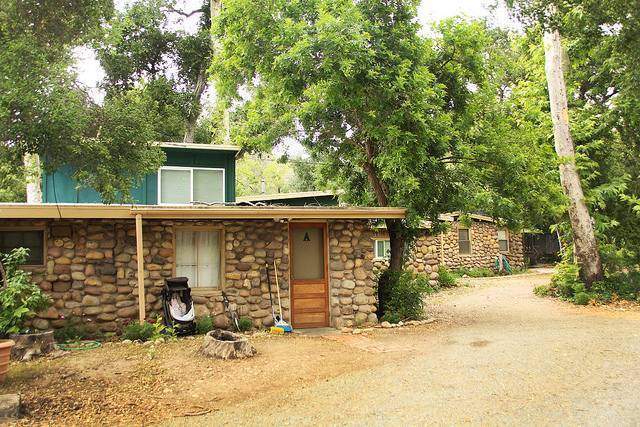 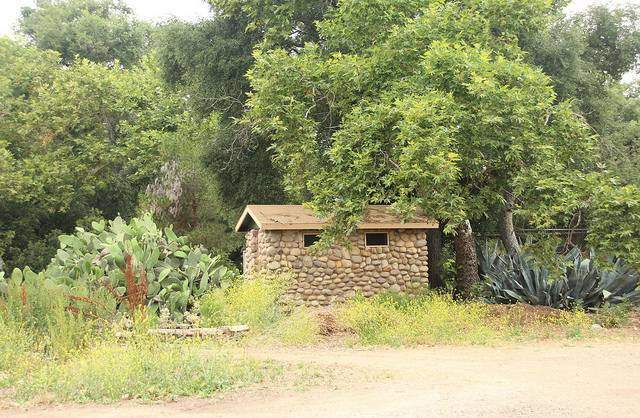 Here is a vintage shot of one of the units from above, taken in the 1970’s: 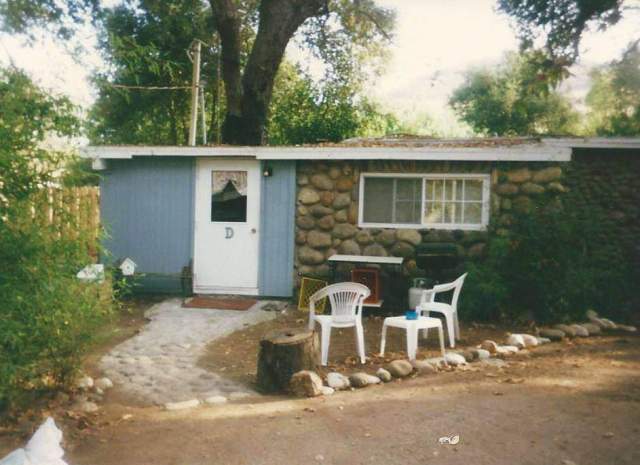 This last house I was told was built in the late 1800’s,  The lady I spoke to is just renting the home though and did not know much information: 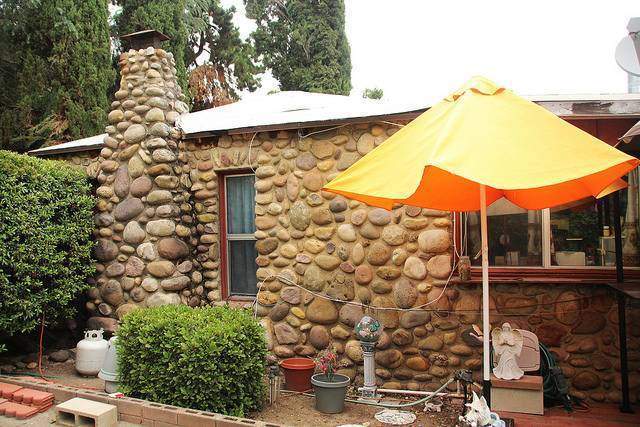 We can thank these people for the beautiful trails and oak trees that remain on this road. The city was fighting to tear it all down to expand the road. Instead we now have a park and peaceful, shaded trails:.  Learn more about Old Pomerado rd. and the ponds on this page. 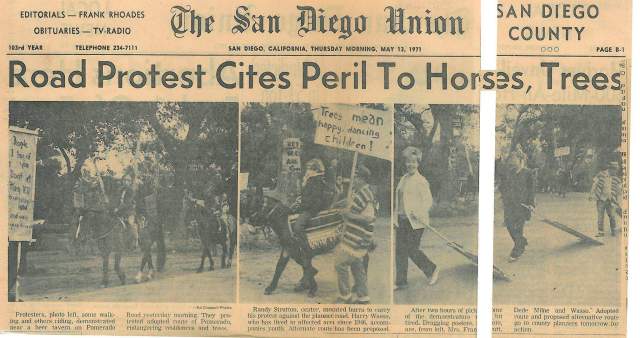