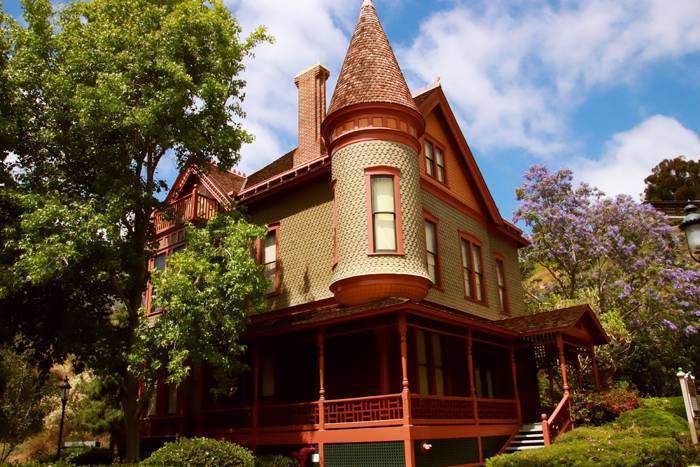 **Make sure to check out our list of all hidden gems in Old Town!** 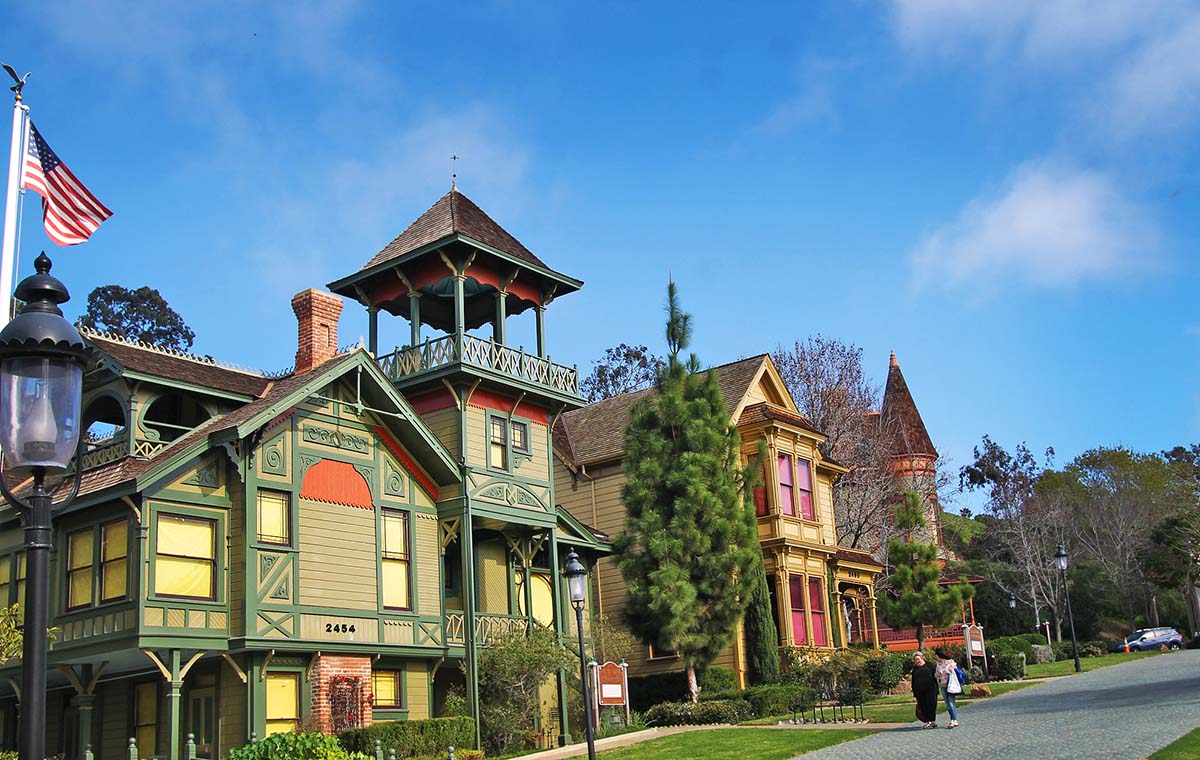 Heritage Park is a county park located near Old Town San Diego State Historic Park and measuring almost eight acres. It was developed to preserve examples of San Diego’s historic Victorian architecture including Italianate, Stick-Eastlake, Queen Anne and classic revival styles. The properties were all relocated from their original locations with the help of San Diego County and Save Our Heritage Organisation.

The park is open to the public and a wonderful addition to your day around Old Town. Most of the homes are locked up (sooo hoping to get a tour of them all one day) but a few are open, including a tea shop. I never tire of walking around the spot!

Senlis Cottage (1896) A modest cottage built for Eugene Senlis, an employee of San Diego pioneer horticulturist Kate Sessions. This house, without the amenities of gas, electricity, water, or sewer, is an example of dwellings occupied in the 1880s by working-class people. Senlis Cottage is open daily for public viewing from 9am – 5pm. 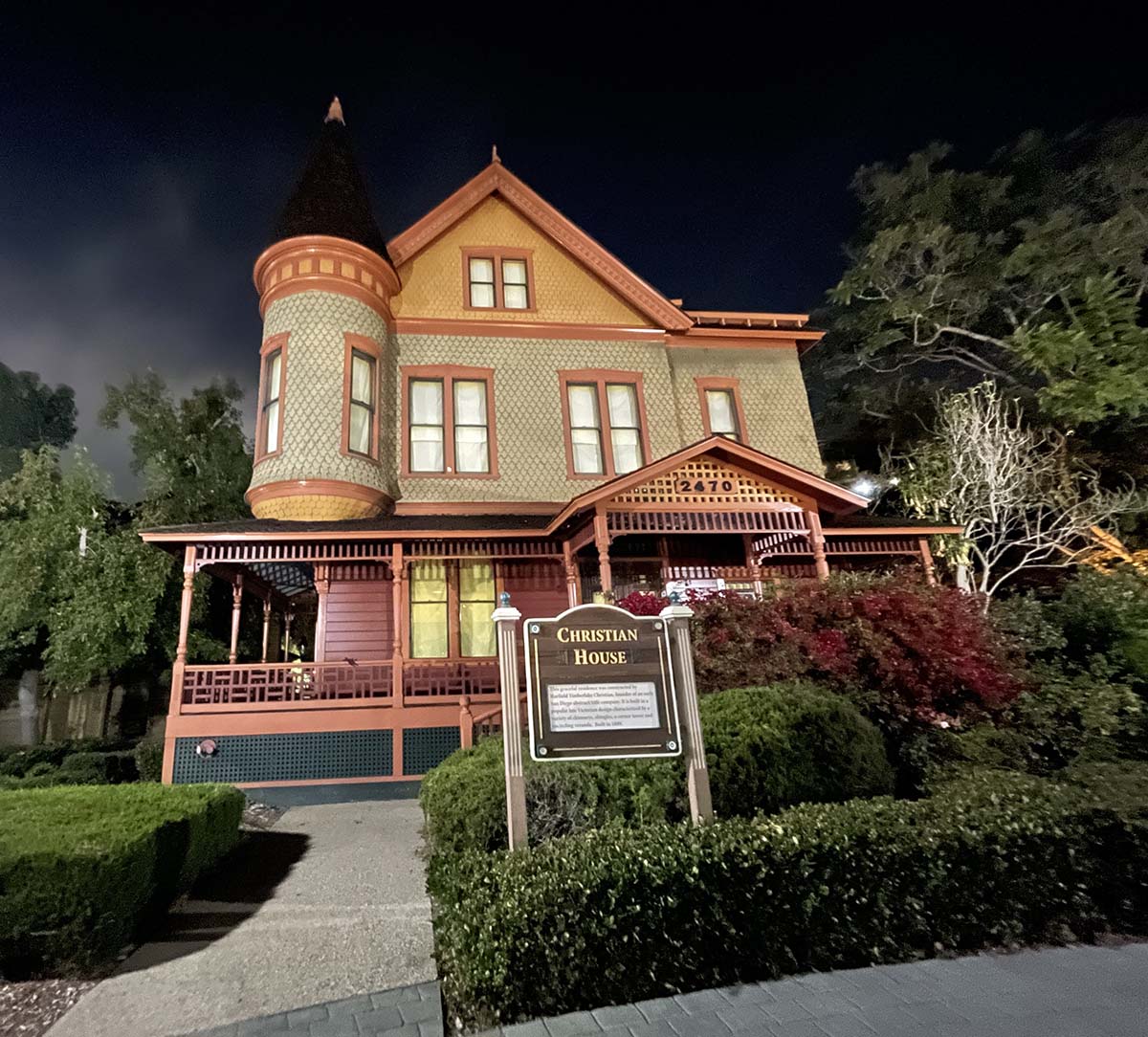 Sherman-Gilbert House (1887) This house was built and first owned by John Sherman, cousin of General William Tecumseh Sherman. The “widow’s walk” and circular window are key elements of this structure, which moved to Heritage Park in the spring of 1971. From 1892 to 1965, sisters Bess and Gertrude Gilbert, patrons of art and music, brought internationally famous entertainers to receptions in their home. Among the artists were Yehudi Menuhin and Arthur Rubinstein.

Christian House (1889) This graceful residence was constructed by Harfield Timberlake Christian, founder of an early San Diego abstract company. It is built in a popular late Victorian design characterized by a variety of chimneys, shingles, a corner tower, and encircling veranda.

Bushyhead House (1887) Edward Wilkerson Bushyhead, early San Diego sheriff, chief of police, and San Diego Union newspaper owner, built this house as a rental. The Italianate style combines double doors with glass panels, tall protruding bay windows and a low-pitched roof. The Bushyhead House was moved to Heritage Park in summer of 1976. Bushyhead, who was part Cherokee Indian, marched in the “Trail of Tears” during the displacement of the Southeastern tribes in 1838-39.

McConaughy House (1887) This house is named for its original owner, John McConaughy, who founded the first scheduled passenger and freight service in San Diego County. His four-horse passenger stages and six-horse wagons operated between San Diego and Julian. Visit the Old Town Gift Emporium, specializing in Victorian porcelain dolls, inside the McConaughy House Thursday – Tuesday from 10am to 5pm. 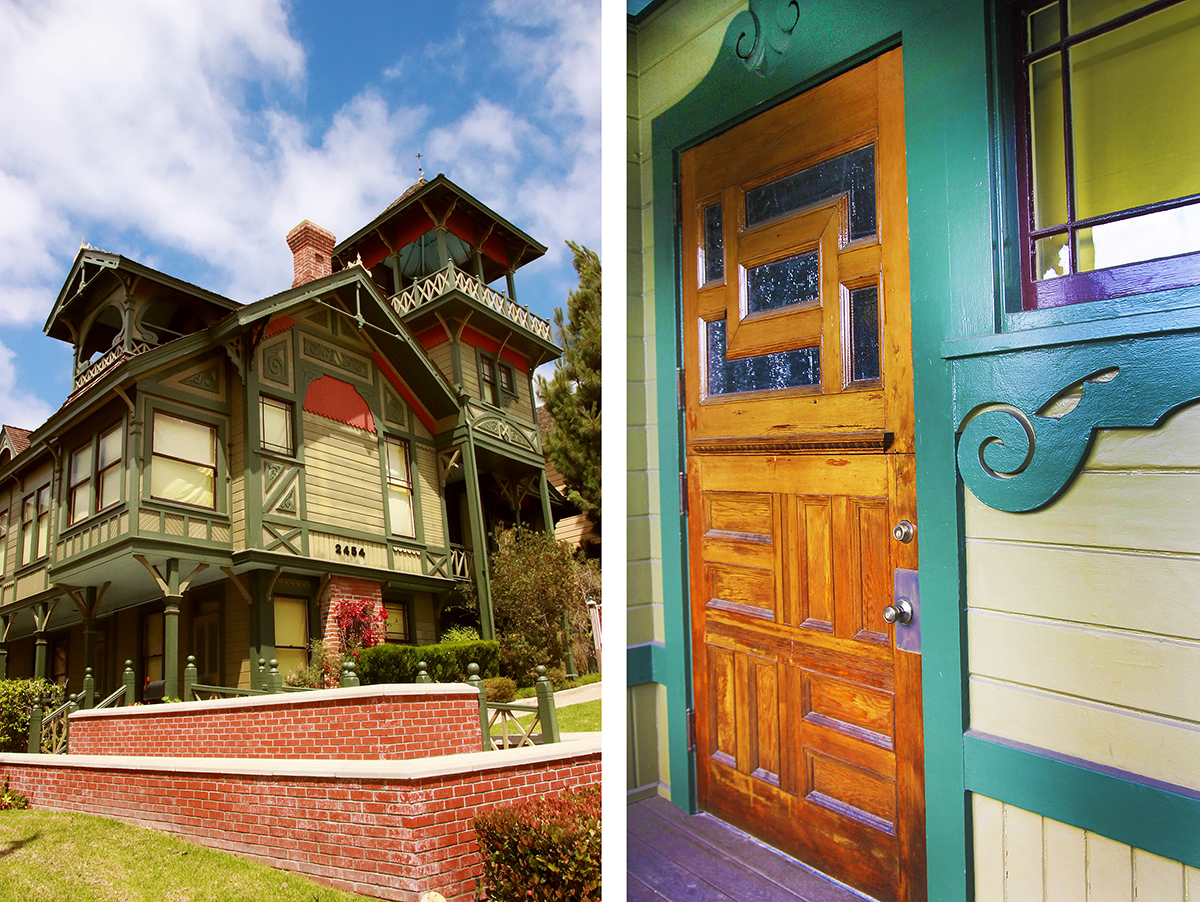 Temple Beth Israel (1889) San Diego’s first synagogue, constructed by the Congregation Beth Israel, also became temporary quarters for many religious sects before establishing churches of their own. The structure reflects the church styles of the late 1800s. The first services were held September 25, 1889. PHG handles reservations for weddings, bar mitzvahs, receptions, and public meetings in this building. Temple Beth Israel is open daily for public viewing from 9 a.m. to 5 p.m., with an exception for private events.

Burton House (1893) Pediments and dentil cornices inspired by classic sources mark this house. Henry Guild Burton, retired Army physician, built it during a trend that by the turn of the century began to eliminate decoration.

There have been reports of footsteps making their way around the houses along with many other unusual and unexplained annoyances in these homes.

Many times these disturbances were loud enough to cause staff to peak around the corner to check out where the strange sounds were coming from – only to find hallways and rooms totally empty and silent. 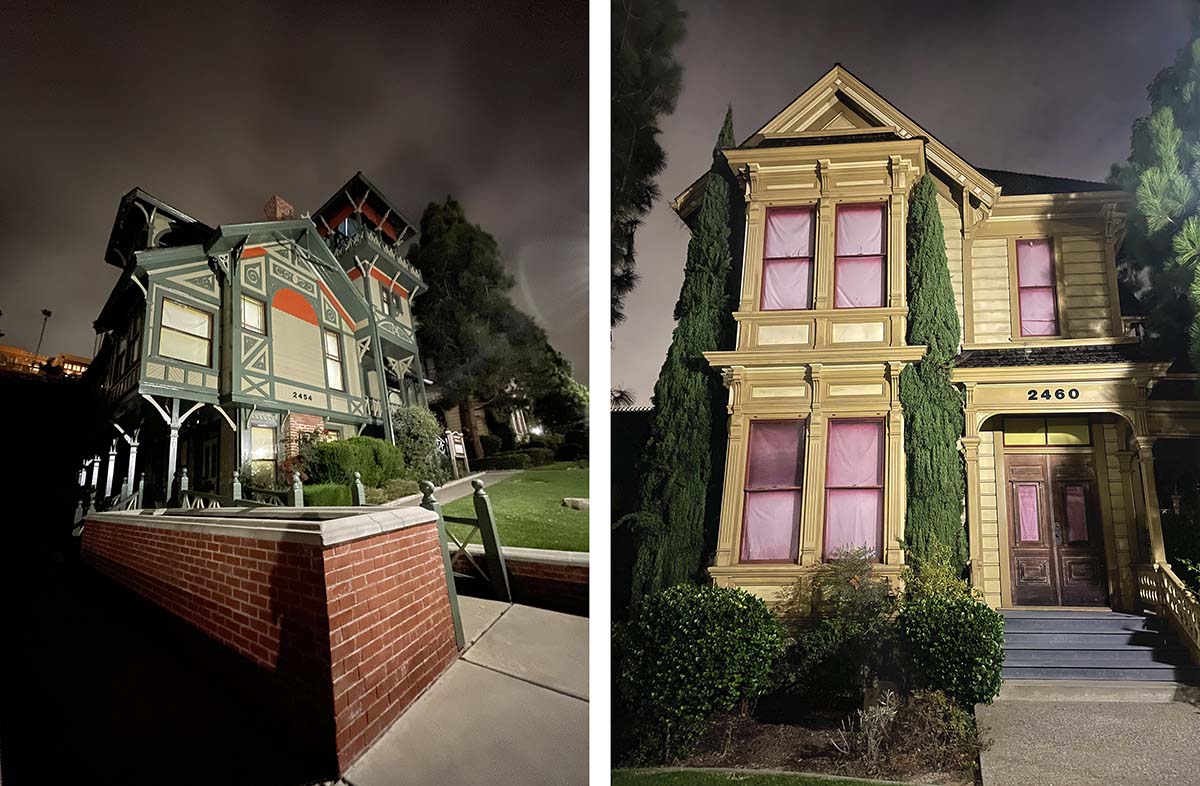 Apparently, the spirits of Mary and John McConaughy and at least one of their sons are still active haunting one of the homes. According to the current occupants, things are always mysteriously moving around on the first floor.

The most common occurrences are attributed to Mary, who keeps close tabs on what goes on inside the house. Her benevolent energy will often rearrange merchandise as well as toy with the electricity. 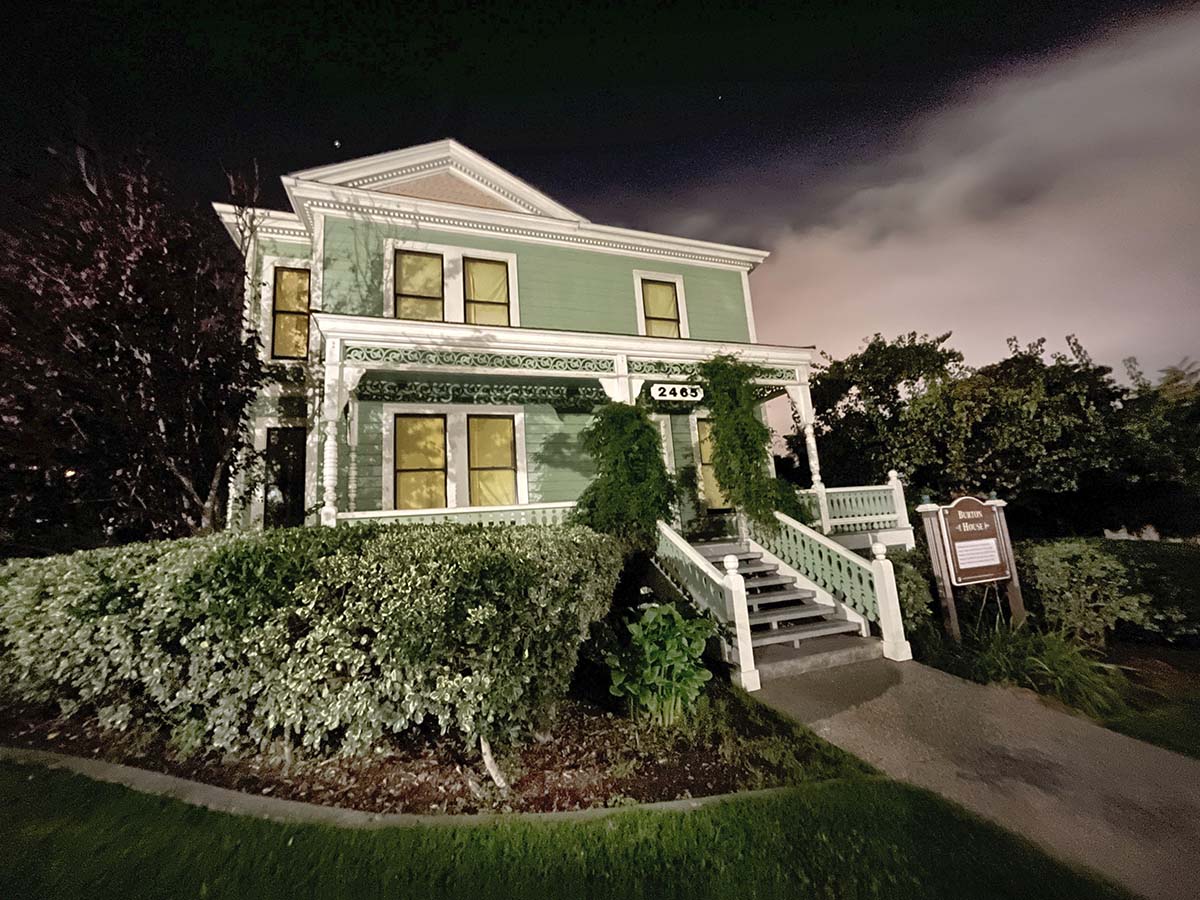 Although actual sightings are infrequent, most of the employees sense that an active spirit is at work. Mary seems to love testing the patience of the staffers as she constantly toys with the cash register and display cases. The register has reportedly operated on its own and display lights mysteriously turn on even when the cabinets are unplugged.

To those sensitive souls that visit the house, many report that there is a constant feeling of being watched by a female presence as they wander through the gift shop. The guests describe this feeling as being “feminine and protective.” 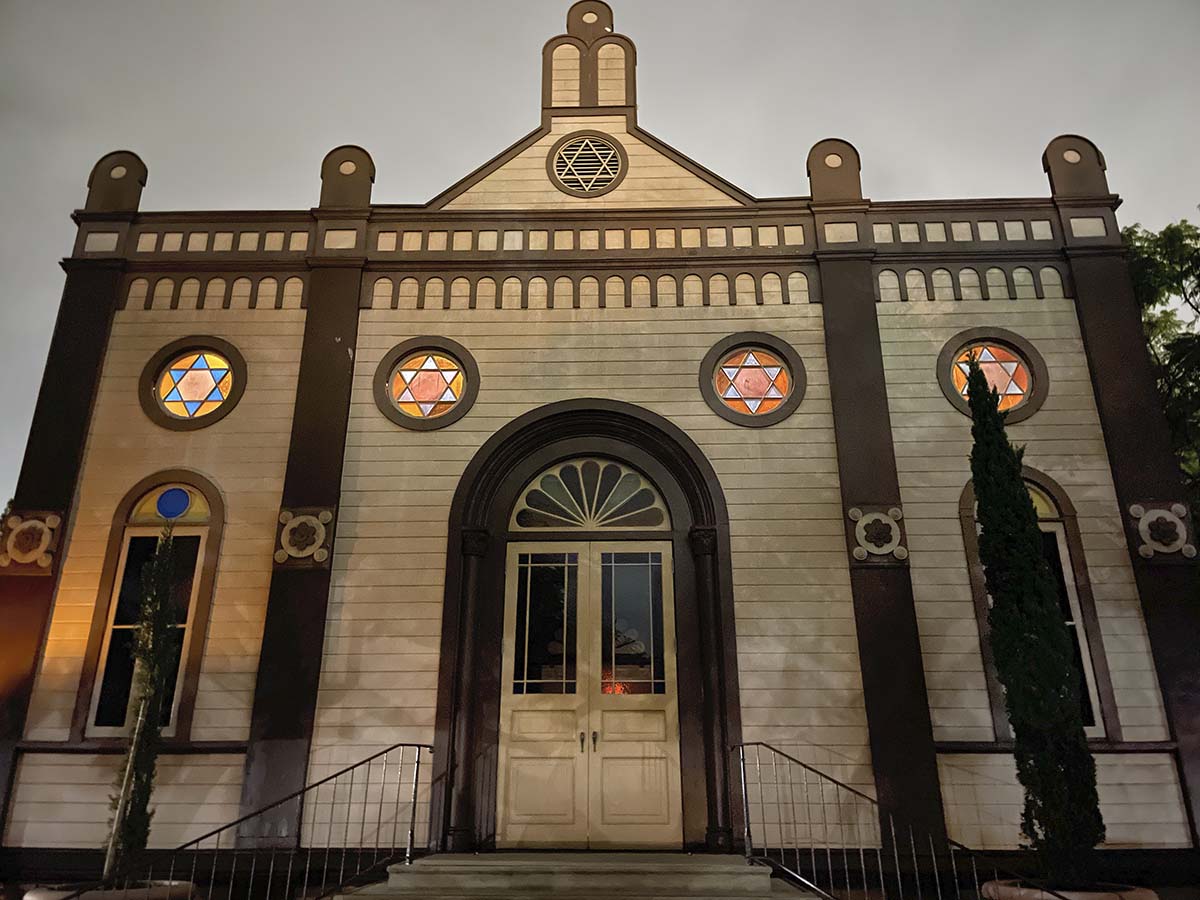 Although the upstairs is closed off to the public and is used for office space, John has made his presence known as well. His restless spirit and heavy footsteps can be heard echoing downstairs when the upstairs area is devoid of people.

Just a tip, but there’s a secret trail at the end of the park that leads you to a quiet bench overlooking Old Town! 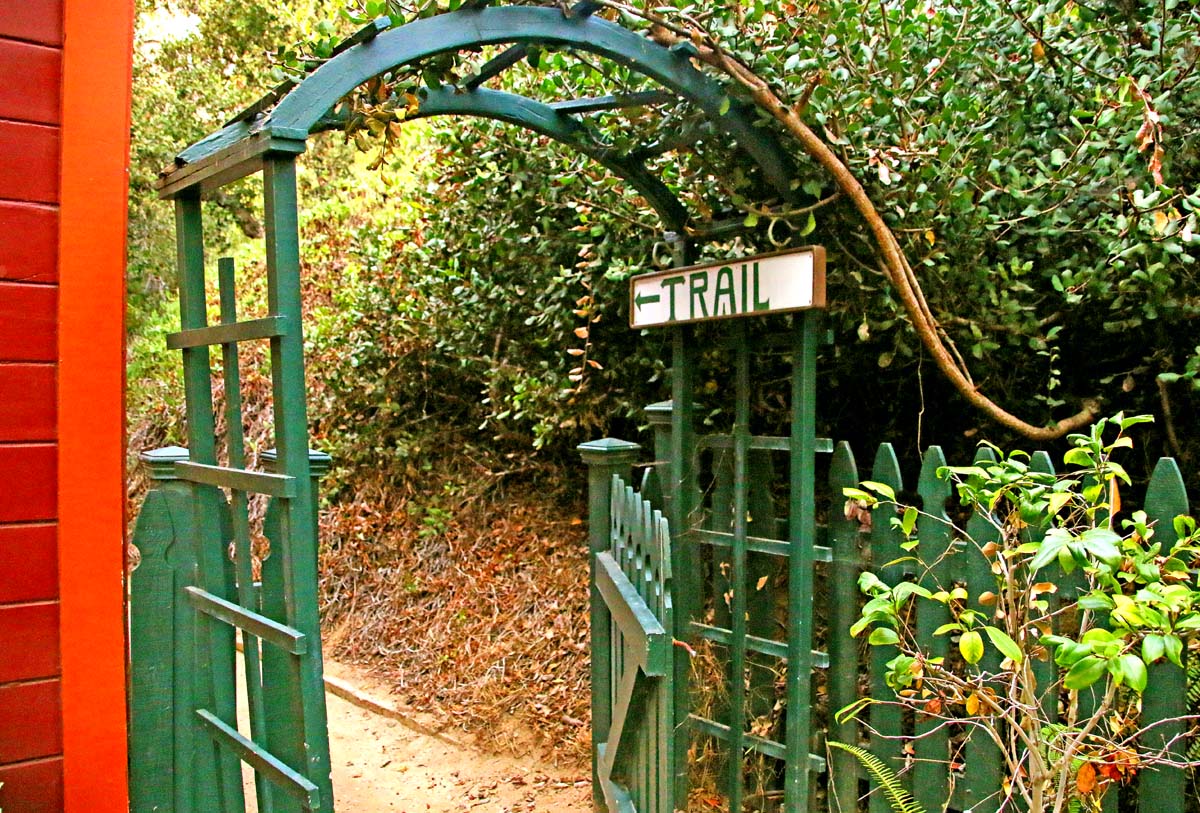